Previewing as:
Customize this template and share it to collect e-signatures
Shared by davidmjuarez in Proposal
Cloned 16,056

A budget proposal is a formal document that is used to outline the financial budget plan for a company, a project, or campaign. Jotform Sign’s free Budget Proposal includes space to fill out expenses for employees/personnel, equipment, materials, supplies, travel, events, workshops, conferences, and utilities. Customize this template however you see fit, then share it via email to collect e-signatures from any device.

Need to make some changes? No problem! You don’t need any coding or design experience — simply drag and drop to add or edit form fields, include your personal branding, change fonts and colors, and much more. You can also set up an automated signing order to ensure signatures are received in a timely manner. Save time and paper with this online Budget Proposal template from Jotform Sign.

Getting your business off the ground is no small task and might require gathering funding from investors. With Jotform Sign, your young business can create a Free Business Proposal Template to outline your business’ needs, ideas, and benefits — making it easier to get investor buy-ins. Just create and customize your proposal, then send it to your investors and stakeholders for their e-signatures.Need to make changes to your Free Business Proposal Template? No problem! Jotform’s got you covered. Drag and drop to personalize your form to align with your company branding and policies. Add or remove form fields, create automated signing orders for multiple investors, upload logos and branding, and choose fonts and colors that work best for you. Work smarter with Jotform Sign.

Don’t waste time creating multiple project proposals from scratch. With Jotform Sign’s ready-made Project Proposal template, you can generate and customize a professional-looking proposal that includes details such as an overview and description of the project, resources and budget, project goals, expected outcomes, and more. Update the wording however you see fit, then share it with clients via email to seamlessly gather e-signatures from any device.Want to personalize this Free Project Proposal to match your company’s branding? No problem! Using our powerful online builder, you can add or edit form fields, upload your logo and branding, include images, change fonts and colors, and make other design changes without any coding. Once both you and your client have signed this proposal, you’ll automatically receive a finalized document — ready to share, download, and print for your records.

Create a Mobile App Development Proposal Template that works for all occasions with Jotform Sign. With our entirely online signature and feedback collection process, you’ll be able to manage and reference signatures from your team members in one convenient place. Share via email or embed in your online team portal.Customizing this Mobile App Development Proposal Template is simple and efficient with Jotform Sign. Update the terms and conditions, add or remove form fields, change fonts and colors, and make other cosmetic changes with no coding required. Create your app proposal, send it straight to your team, and start collecting signatures and feedback instantly. Collaborate smarter with Jotform. To collect e-signatures on any device, create an e-sign document with Jotform Sign.

These templates are suggested forms only. If you're using a form as a contract, or to gather personal (or personal health) info, or for some other purpose with legal implications, we recommend that you do your homework to ensure you are complying with applicable laws and that you consult an attorney before relying on any particular form.

Write a winning proposal in minutes with Jotform’s Proposal PDF Templates. Whether you need a business proposal, bid proposal, or project proposal, these free proposal templates will help guide you in creating an attention-grabbing proposal that contains key information regarding objectives, strategy, and budget. Proposal submissions will automatically be converted into PDFs that are easy to print, pitch, and present.

Personalize your proposal for your company or potential clients using Jotform’s PDF Editor. If you need to start from scratch, you can always get started generating a custom proposal for free! In any case, you’ll be able to modify your proposal template however you’d like, from writing additional form fields to changing fonts and colors. Jotform simplifies the proposal process so you can spend less time drawing up your proposals and more time closing deals.

Prepare a business proposal to present to interested investors. Personalize to match your branding. Works on all devices. Collect e-signatures quickly.

Generate a free project proposal in seconds with Jotform Sign. Fill out and e-sign from any smartphone, tablet, or desktop. Easy to customize and sign.

Create a proposal to send to your mobile app development team. Works on desktop, tablet, and mobile devices. Drag and drop to customize. No coding knowledge needed.

Save time by automating the way you create, fill out, and sign proposals. Easy-to-customize document template. E-sign instantly on any device.

Create a professional consulting proposal via Jotform Sign. Drag and drop to customize. Fill out and e-sign from any device. Easy to share. No coding.

Create a bid proposal for upcoming projects. Customize to match your project’s theme. Works on any device — desktop, tablet, or mobile. Collaborate smarter.

This sponsorship proposal template helps you attract and convince your leads to be part of your event as a sponsor. It contains a front page, cover letter for the leads, company overview, information about the event and terms.

Create a custom grand proposal in seconds. Easy to share and collect e-signatures. Works on any device. Drag and drop to customize. Streamline your workflow.

Create a construction proposal for all your needs. Drag and drop to customize. Works on smartphone, tablet, and desktop devices. E-sign in seconds.

Create a software proposal in seconds. Fill out and e-sign in seconds. Share with clients via email. Works great on any device. Converts to a PDF. 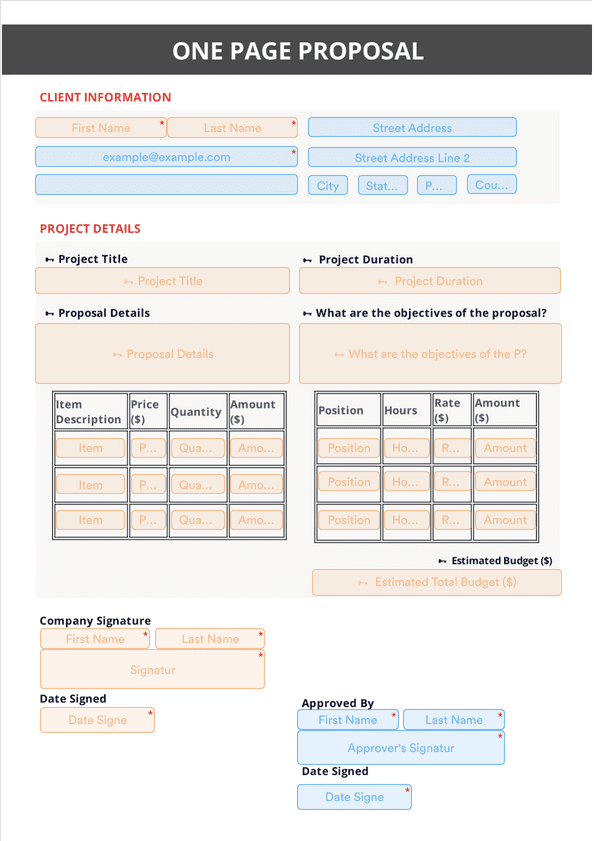 Generate one page proposals with ease. Free template. Easy to customize. Share in seconds. Fill out and sign on any device. Save time with e-signatures.

Generate a custom budget proposal in seconds with Jotform Sign. Fill out and sign on any device. Drag and drop to customize. Converts to a PDF document.

Generate a nonprofit business proposal and share via email. Fill out and sign from any smartphone, tablet, or desktop. Customize in seconds. No coding. 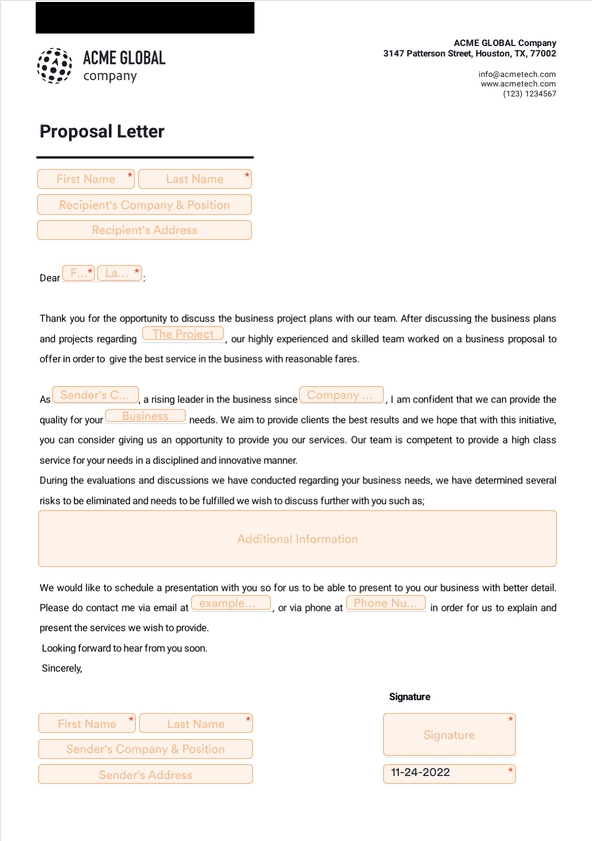 Create a proposal letter with this ready-made template. Easy to customize and share via email. Fill out and e-sign from any device. Converts to a PDF.

Generate a marketing proposal with this free template. Fill out and e-sign in seconds. Easy to customize and share. Converts to PDF document. No coding.

Create a custom interior design proposal with this free template. Easy to customize and share. E-sign in seconds. Works on all iOS and Android devices.

Create, track, and manage event proposals online. Gather e-signatures from any device. Drag and drop to customize the design. Turn into completed PDFs.

Create a job proposal with this free template. Fill out and e-sign from any device. Easy to customize and share. Works great on any Android and iOS device.

Create a professional proposal for your next contracting job. Works on mobile, tablet, and desktop devices. E-sign in just seconds. Converts to PDF.

Create a catering proposal for your client’s next event. Easy to edit and customize. Works on all mobile, tablet, and desktop devices. Receive copies upon approval.

Create a professional research proposal with Jotform Sign. Easy to customize and share. Fill out and e-sign anytime, anywhere. Converts to a PDF.

Create a business proposal for your next music venture. Create and send in minutes. Drag and drop to customize. Works on all iOS and Android devices.

Create a go-to-market strategy for your team. Works well on all devices. Drag and drop to customize. Email or embed to share. Converts to PDF easily.

What is a proposal?

A proposal is a formal offer written in response to a specific request or opportunity with a prospective client. As the name suggests, it proposes a unique idea or a solution to a client’s problem. Proposals are evaluated on whether they meet a client’s expectations regarding goals, timelines, deliverables, and budget.

What are the different types of proposals?

What should I include in my proposal?

Our free proposal templates already include everything you'll need for your proposal. To learn more about proposals, read our article on items to include in a proposal!

How should I write an effective business proposal?

It takes a lot more than a good idea for a proposal to be successful. Check out our tips on how to write a winning proposal.

What makes a proposal different from an estimate, quote, bid, or business plan?

Unlike estimates, quotes, and bids, proposals include information beyond the specific cost of a project or service. Proposals provide an in-depth explanation of the work being done, with details about scope, deliverables, milestones, and qualifications as well as budget.

Can a proposal become a contract?

For a document to be considered a legally binding contract, it must consist of an offer, consideration, and acceptance. A proposal can serve as the foundation for a contract, but it will generally only require a client’s signature, whereas a contract needs signatures from all involved parties.

A signed proposal may become a contract only if it contains signatures from each party and contractual language such as terms and conditions. However, it’s best to keep your contract separate from your proposal in case your client disagrees with your offer and requires a new document outlining the negotiated terms. If you need inspiration for your contract, we recommend our free contract PDF templates.

These templates are suggested forms only. If you're using a form as a contract, or to gather personal (or personal health) info, or for some other purpose with legal implications, we recommend that you do your homework to ensure you are complying with applicable laws and that you consult an attorney before relying on any particular form.

Go to My Forms and delete an existing form or upgrade your account to increase your form limit.