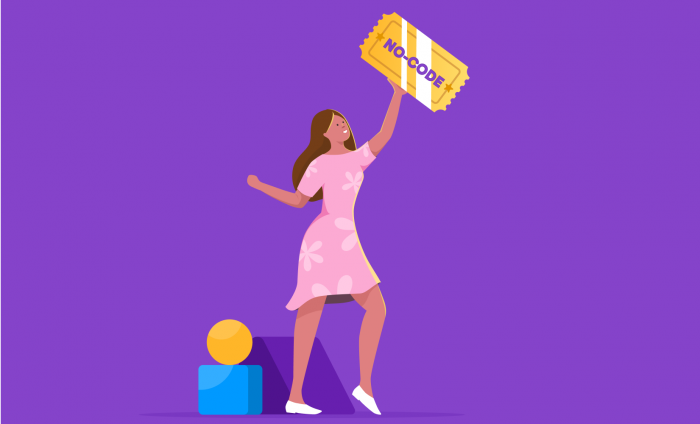 "We are the music makers, and we are the dreamers of dreams,” Gene Wilder grabs his small co-star by the cheeks and delivers this iconic line without blinking.

It’s a scene many of us grew up watching — of an eclectic candy tycoon who deems the impossible, possible.

The beloved film Willy Wonka & the Chocolate Factory, was first released back in 1971 in theaters everywhere. Kids and adults alike rejoiced  from watching this strange yet comforting musical fantasy come to life.

The film, put simply, is about an owner who leads five young children on a thrilling tour of his factory. It’s considered a genuine work of imagination, because it touches upon this wonderment: why settle for a measly chocolate bar when you can have the whole factory for yourself?

In being invited into Wonka’s world, we’re privy to what’s normally been kept in the hands of a small group of people.

In my opinion, this speaks to what the “No-Code” movement is all about.

In giving us a way in — in giving us the golden ticket to all become makers in our own right.

As CEO of Jotform, I’ve spent the past fifteen years with the above vision in mind. In creating no-code products, I wanted people from all walks of life to feel that same rush of excitement that comes from creating something truly original.

While the “no-code movement” is making its way into the mainstream, many no-code tools have actually been around for quite some time. They’ve only now begun to gain larger scale traction.

But at its core, no-code software are platforms that allow anyone to create without writing a single line of code. To get a better idea of what this movement means, I’d like to give the following example that I normally use with my own team.

I believe there are three different kinds of products out there. Opinionated software like Google Calendar and Zoom which allows you to do one thing and do that thing exceptionally well. The downside, of course, is that products like these don’t let you build anything with them.

Then you have an entirely different group mainly used by developers like custom built software, and you’ll see this with content management systems.

No-code is the third kind of product, and it doesn’t require you to be a programmer or “mad tech” in order to build things online. You can actually develop products without learning to code.

Case in point: Jotform has always been a no-code product. There are no hassles — you simply go from idea to execution in a fraction of the time it used to take.

When people come to our site, they’re not simply doing something the way they would with Google Calendar.

Other no-code products like Webflow, Bubble, and Squarespace also fit within this same category, making it easier for people with zero programming skills to use them.

allowing for greater creativity and ingenuity.  Ryan Hoover, the founder of Product Hunt, put it this way:

“As creating things on the internet becomes more accessible, more people will become makers. It’s no longer limited to the <1% of engineers that can code resulting in an explosion of ideas from all kinds of people.”

I’ve witnessed this personally, time and time again. In placing creative freedom into the hands of millions — no-code will allow us to continue closing the gap between an elite few and the wider mainstream. Here’s everything you need to know about this movement and how you can turn your own ideas into opportunity.

Table of Contents Next Chapter