A Brief Introduction to No-Code Chapter 3: How Does It Differ From Low Code

How Does It Differ From Low Code 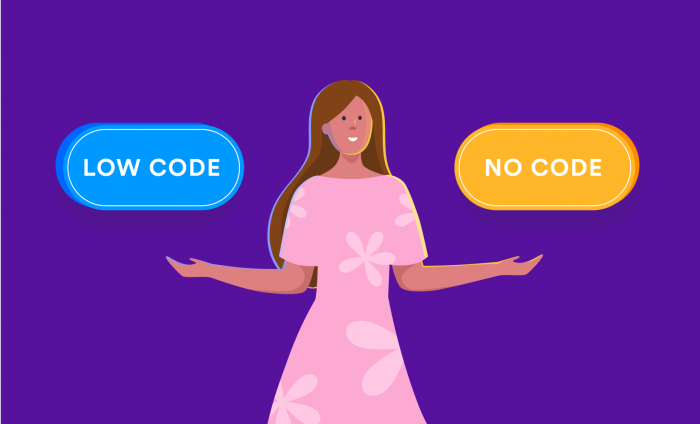 While you’ve probably heard these terms thrown around on social media by techies and entrepreneurs alike, there seems to be a lot of confusion about how they differ from each other.

Both are often grouped together into the same category, but it basically comes down to this: no-code is used by those who don’t know any actual programming languages but would still like to build technology. Whereas, low-code is used by developers of all different skill levels to design apps quickly and with little hand-coding.

Each has their own advantages and disadvantages, but let’s take a deeper dive into what separates one from the other.

“Low-code software is software that can be fully customized with a ‘low’ (minimal) amount of programming,” writes Soren Kaplan for Inc.com. So, you can build user-friendly and responsive apps with low code. The catch, however, is that it also requires you to have some kind of knowledge of coding.

As Kaplan notes, it’s a faster option than if you were to simply hand-code them. “Instead of taking weeks or months to develop a custom application, it can be done in a few hours or days.” Low code platforms such as Salesforce and Zoho are good examples of what these look like.

“No-code software, on the other hand, takes the low-code concept to another level,” writes Kaplan, “allowing literally anyone to tailor an application to their needs without any programming knowledge whatsoever.” Platforms like Airtable, Zapier, and my own company Jotform — are all included here.

According to Forbes contributor, Jason Bloomberg, the distinction between low-code and no-code has more to do with the types of people using these platforms to build applications.

While low-code centers on professional developers looking to streamline and simplify their work, no-code, Bloomberg explains, is more focused on “citizen developers,” who want to build functional apps without the need to write a line of code.

But let’s put all of this into simpler terms.

Say, for instance, that you’re a budding entrepreneur with absolutely no developer skills whatsoever and only count on a small budget. No-code makes it so that even if you have zero technical knowledge, you can still customize your business processes and creative endeavors. For instance:

Instead of using a large chunk of your funds to contract a developer for a simple website, you can easily use a platform like Webflow to create a visually engaging design. It’s a win-win all around: you save time and money, and can focus your skills on more high-level work.

Don’t get me wrong, I believe coding has its value. As a life-long techie, my love for coding won’t ever go away. And as Bloomberg points out “There will always be a need for hand coding after all – since someone has to create the Low-Code/No-Code platforms and tools themselves.”

This is what compelled me to develop no-code tools fifteen years ago — that anyone, no matter their skill level, can have the tools to create.

Jotform has never taken a penny in outside funding — we’ve been bootstrapped from the beginning. Which is to say, I understand what it means to start small and gradually grow your business.

What excites me about the rise of no-code is seeing others discover this same process for themselves.

I want everyone (not just techies like me) to have this opportunity.