4 years at JotForm: a reflection

In October 2010 I moved to California after accepting a job at a nonprofit. I was a newly minted college grad, excited to learn and make a difference.

Keep in mind what the job market was at the beginning of 2011. The US economy was on its way to recovering from a recession, but 8.9 percent of Americans were still out of work (compared to just 3.7 percent today). It was a lousy time to be inexperienced.

Completely broke, I hustled to land the first job I could — an entry-level marketing role at a publicly traded financial services company that agreed to pay $13 an hour, which I negotiated from $10.50. Both of those wages wouldn’t even qualify for minimum wage in San Francisco today.

Stuffing envelopes and spending hours every week making copies and putting together binders will keep any ego in check. But, looking back, the job was the best thing that could have happened to me professionally. It gave me my first true start.

After 15 months, I left for greener pastures and a better paycheck to take a marketing position with a well-known medical device company.

That company laid me off after only six weeks in a 20-percent reduction in staff. My boss at the medical device company graciously lined me up with a job at her husband’s company, an e-commerce business that needed a marketing copywriter.

That ended up being a wonderful organization, as luck would have it. I made terrific friends and really respected the owners. But I was also stuck doing the same role, with little opportunity for advancement or increased pay. Feeling I’d outgrown my role, 15 months later I left for another position. This time for a startup in San Francisco, which hired me on as a marketing coordinator.

The startup was exciting. The people were smart. Things moved fast and the office was huge and had a ping pong table and beer keg. More importantly, I loved my role there and I was learning a ton.

But seven months after I started, the company ran out of runway and shut down, as 90 percent of startups do.

I made it exactly four months before I gave my notice, without even having another job lined up. The corporate culture exhausted me, and I didn’t feel like I was a good fit, even if the people were nice. It was a respectful departure, but a quick one nonetheless. This was October 2014.

I consider my time at JotForm to have been a stroke of good luck. I interviewed for, and was offered the job, within 36 hours of my last day at the security company, directly by the CEO.

The software company was launching a San Francisco office and needed experienced marketing people to make it happen. They were hiring quickly and needed someone who could start ASAP.

In many ways it was a classic startup, but in others it wasn’t. The new office wasn’t flashy, but the team seemed friendly. The company bones seemed strong. It was bootstrapped and profitable. The online form building product was established and had thousands of paid subscribers.

I thought, “I could be here for at least a year. Maybe two, if I’m lucky.” And now it’s been four. 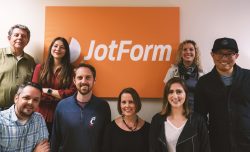 Of course, there are a myriad of reasons why a person stays at a job long term. Mine are as follows, in no particular order:

For me, working at JotForm has also been a crash course in what it’s like to work at a technology company in San Francisco. I’ve become semi-conversant in basic developer terminology. I’ve had important meetings at major tech company offices nearby, including DocuSign, Square, Asana, WePay, PayPal, Stripe, and Box. I go to meetups and major conferences. I meet people around the country who use our software.

Meeting people in real life who use and love JotForm is quite possibly the most satisfying feeling I’ve ever experienced on a professional level. It adds purpose and humanity to what I do. I don’t write blog posts for page views; I write them to be read by real people.

Here are three ways to keep the excitement in your existing job.

My title never changed at JotForm, but my job sure has. When I first started, I almost exclusively pitched bloggers and journalists to secure JotForm media coverage.

Today, I manage a small team of content creators, develop customer case studies, usher in new integration partnerships, write blog posts, create videos, and work collaboratively with our growth team on countless projects. I still do PR when I can, but my job looks completely different than when I started because I went where I was needed.

If you care at all about what your company is doing, and you appreciate the direction it’s heading, then buy in.

I don’t own JotForm. But I act like I do all the time. It enables me to make better decisions, to be concerned about smaller details, and to have more empathy with my colleagues. Most importantly, it keeps me from being bored for any prolonged periods.

When you believe in your organization’s objectives, and you take ownership over what you do there, you aren’t just working for a boss. You’re working for yourself.

What are you trying to get out of your job? I mean, what are you really, truly trying to accomplish? If it’s just collecting a paycheck, fair enough. Do what you can to get paid and not get fired.

But maybe you’re trying to climb the ranks, improve your skills to position yourself for another company, or just genuinely make a difference and help your company’s mission. If any of that rings true for you, then measure your success at your job accordingly with real goals and metrics.

I hopped aboard JotForm after it had already been around for eight years, so I can’t speak to the “early days.” But since 2014 this company has grown and evolved in ways I never imagined then.

When I started, JotForm had roughly 35 employees. Today? Close to 140. We’ve opened new offices, changed our design, and launched dozens of new features, integrations, and products. We even acquired another website. The company, product, culture, and user growth have all made substantial leaps these past few years. It’ll be fun seeing what’s in store for the future.

I’m grateful for the situation I find myself in. I get to work with smart people doing smart things in a nice office in downtown San Francisco.

My career certainly didn’t start off with a bang, and the Bay Area is particularly unforgiving if you lack job stability. But maybe—just maybe—it all worked out for the best.

Chad Reid
Chad is VP of Marketing and Communications at JotForm. He’s also a frequent contributor to various tech and business publications, and an absolute wizard with a Vitamix. He holds a master’s degree in communication and resides with his wife and cats in Oakland, California. You can reach Chad through his contact form.

Why work alone won't ever fulfill you

Why no one is really productive

Why you should never lunch alone

Life is a work of art: how to be more creative in any field