It’s no secret that apps are a large part of today’s world. From making payments to ordering food to building forms – we use them for pretty much every aspect of our lives.

Though apps were created to streamline our lives and make them easier, sometimes it feels like they have the opposite effect. Many apps operate as “islands,” working autonomously – unable to connect and integrate with other apps.

Thankfully, superhero app, Zapier, noticed this problem and found a way to save the day.

You may have already heard about Zapier and its “Zaps,” but if you haven’t, they connect, integrate, and automate the apps you use. Recently, Zapier took its Zaps game to the next level – announcing that it has reached a new milestone – 1,000 app offerings!

If this wasn’t already great news, Zapier also announced that JotForm is in their top 100 apps! You might even notice a new nifty badge of honor next to our name on the Zapier website.

1,000 apps is out of this world – not just for Zapier users, but for JotForm customers, too. 1,000 apps means that you have options, dare we say thousands of options, for connecting JotForm to the world’s most powerful business tools. Some of JotForm users’ favorite Zaps include: Microsoft Excel, WebMerge, Google Calendar, amoCRM, Customer.io, and ActiveCampaign.

Thanks to Zapier’s enormous library of integrations, they’re able to improve the operations of JotForm users far and wide.

Which Zaps do you use with your JotForms? Let us know in the comments below! Need some inspiration for how to get started? Here’s a few of the most popular Zaps JotForm users like you are using – go ahead and steal their workflows for yourself! 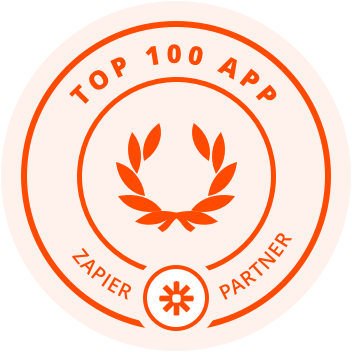 Annabel Maw
Annabel is a Marketing Communications Manager at JotForm. She’s passionate about writing and has worked in communications roles domestically and internationally. When she’s not blogging about SaaS or online forms, she enjoys international travel, loud concerts, and artisan coffee. You can reach Annabel through her contact form.

10 form templates to tackle the coronavirus

How to entice online shoppers with multiple photos and descriptions

15 PDF features you need to know

How to host an award-winning Oscars ballot