15 Beautiful Art Projects, Created to Raise Awareness for a Cause

Beautiful art can be both awe-inspiring and intriguing. Some of it simply awakens the creativity or beauty inside of us all, and other stunning works of art makes us really think about deeper issues. No matter the level of intensity of the piece, great artworks cause most people to stop, if even for just a moment, to have an emotional experience. And this experience, these emotions, will be re-lived every time the viewer encounters that piece of art again.

This is why art created to raise awareness for a cause can work so well. The art work creates a powerful and lasting emotion that moves the viewer to action. Just as with melodies, visual images stick with us more than just words. Most artists are very aware of this power that art contains, which is why so many use art to express themselves, make a statement, or, like the ones below, illicit movement for a cause.

A few of the artists below have even centered most of their art around a single cause. Some of the causes below involved a group of artists who donated their time to help an organization raise awareness. All involve beautiful art that really makes viewers stop and think about making the world a better place. And if you feel moved by any of the causes below, be sure to visit the site and find how you can help. 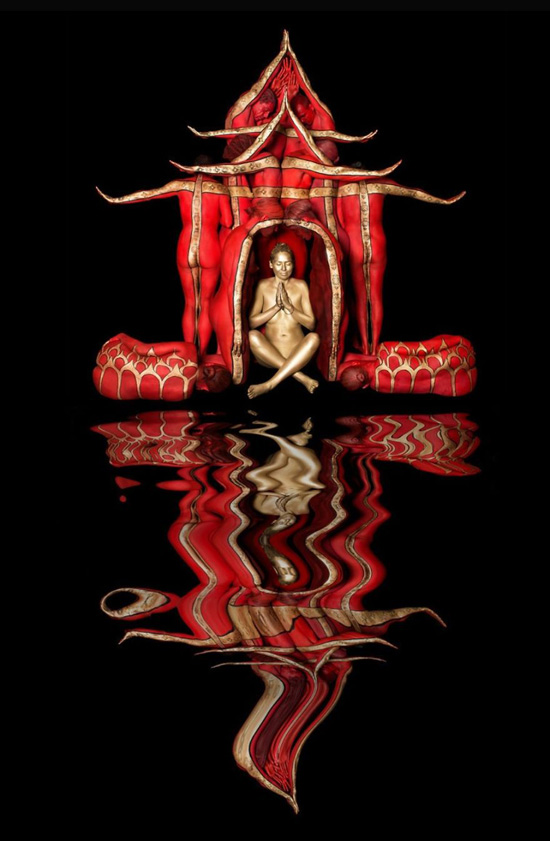 This “Human Temple” art piece Trina Merry was created by bodypainting 17 people. The design layout took her only 30 minutes to engineer and 9 hours to create it live at the WORKS San Jose Gallery using non-toxic, water-based body paint. Merry enjoys using humans for her art, simply because a greater connection is made between viewer and a living, breathing human art piece. This particular piece she designed for Beyond the Four Walls, a social business venture for empowering women in Nepal. The organization sets up Internet cafes the girls can run and, at the same time, also have access to online educations and the ability to launch online businesses. 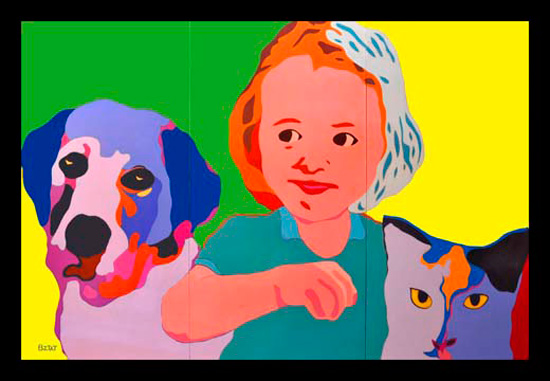 BZTAT, alias for Vicki Boatright, painted this mural for a cause she started in 2011 through a Kickstarter campaign called Okey’s Promise: Art for a Cause. Named after a rescued cat, this public art initiative aims to raise awareness for animal and child abuse and domestic violence. Boatright explains how research has shown how abuses of children, animals, and spouses are related. When you find one, you will often find another. BZTAT’s contemporary, whimsical style of painting captures the innocence of both animals and children; more of her art for the cause as well as commissioned work can be seen on her studio’s web page. 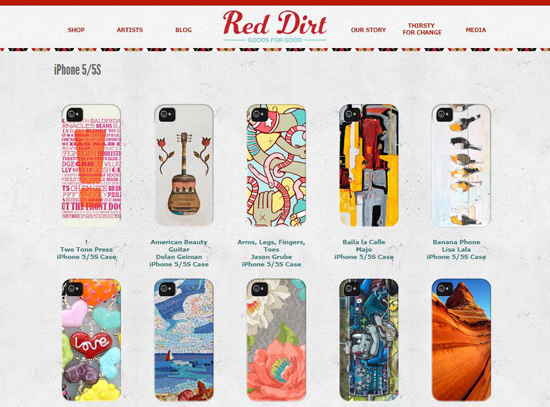 The Red Dirt website was started by Christina Eldridge and Dawn Taylor to sell “Goods for Good” as the tagline explains. A portion of every sale goes to Water.org to deliver solutions to the water crisis so many countries experience. Renown, talented artists from all over the world create the designs for these iPhone 4, 4s, 5, and 5s cases, with a few t-shirts available as well. Every five cases gives clean water to one person for life, since Red Dirt proceeds go directly toward building wells in countries including Ethiopia, Uganda, Haiti, and India.

The Water Tank Project by Word Above the Street 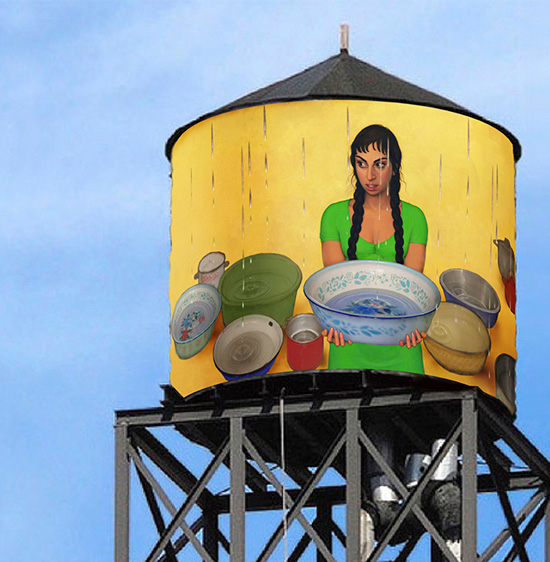 The above water tank art created by Eteri Chkadua is only one of many designed by acclaimed artists as well as NYC public school students for the “Water Tank Project” started by Word Above the Street. This organization started the campaign for creating awareness of the worldwide water crises. Launched just this summer 2014, the ongoing goal is to “transform the New York City skyline” with artwork painted on rooftop water tanks. Alongside of the paintings are tours, educational events, and a symposium to inspire fresh views on global water issues. 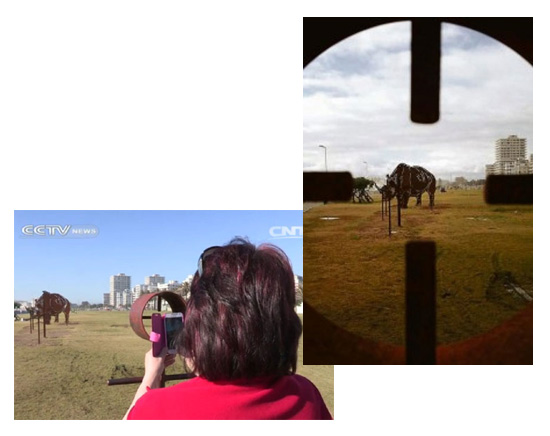 Rhinoceros are at the edge of extinction due to poaching for sale of the horns. A public artwork in Cape Town aims to bring awareness to the decline of the rhino population by showing people what a poacher sees through a rifle scope before shooting and dehorning a rhino. Public art like these help to get the word out to people who would otherwise never know of existing problems. 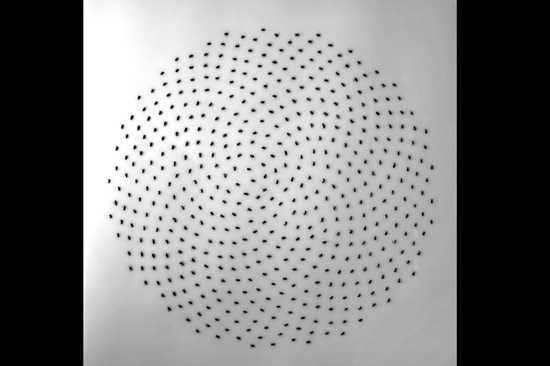 Canadian visual artist, Sarah Hatton, created different artworks usind dead honeybees from her own colony to raise awareness of the bee colony collapse disorder. The one above, titled “Florid” is of the Fibonacci spiral pattern seen in a sunflower’s seed pattern. She explains that neonicotinoid pesticides destroys bees’ navigational patterns by creating confusion and dizziness similar to what viewers experience when gazing at the Fibonacci spiral.

The Canal People: “Our Reflection” by Charles Okereke 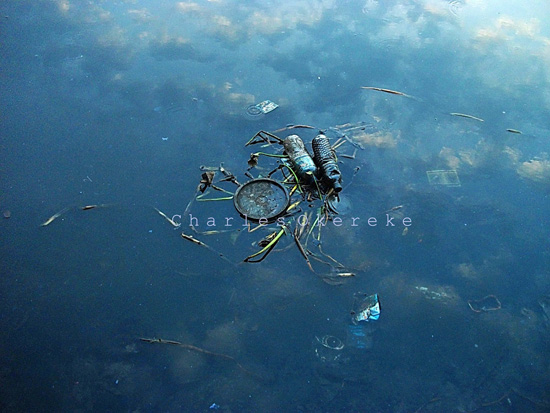 As part of Charles Okereke’s 2009 series called The Canal People, “Our Reflection” is a statement of how we are a reflection of the environment around us – how we pollute and cause gradual demise of the Earth. Okereke took these photos of the Festec village in Lagos, Nigeria, a settlement for poorest in the society. The canal itself is artificial and has become a waste dump, the water highly reflective due to all of the black sludge. 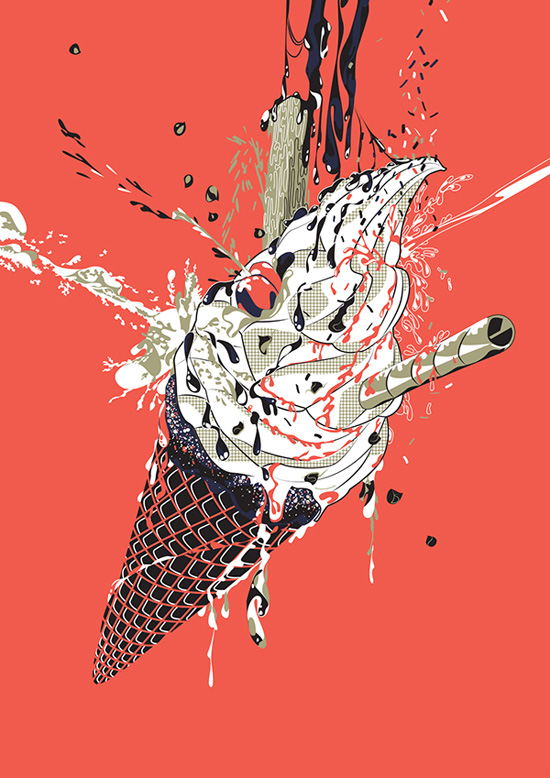 CALM (Campaign Against Living Miserably) is a charity organization for preventing male suicide in the UK. In July 2014, AnyForty, an independent streetwear label, put together a fundraiser for CALM, inviting 27 artists to create artwork based on the word “Happiness.” For Ben the Illustrator, happiness is ice cream. His work along with the others were displayed in the 5th Base Gallery. 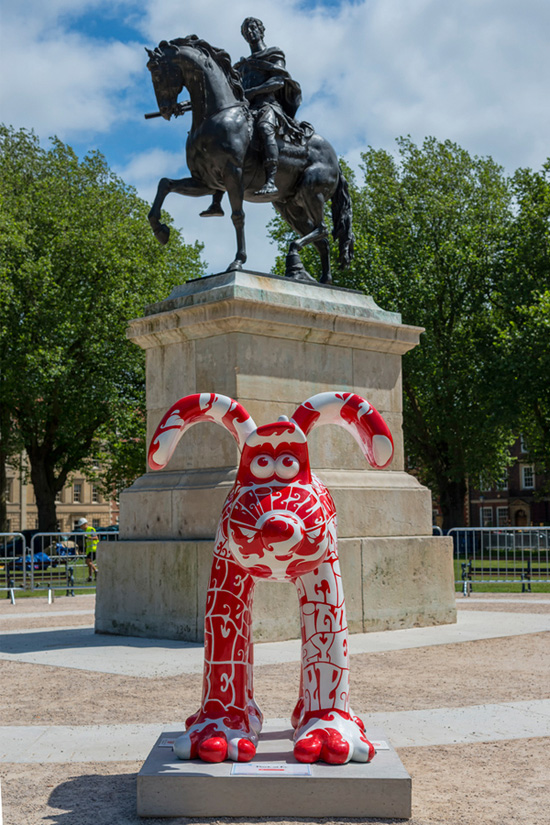 The public art exhibition of Gromit Unleashed involved giant sculptures of the character Gromit from the British stop motion comedy, “Wallace and Gromit.” The 80 Gromits, decorated by invited artists, were displayed all over Bristol and the surrounding area. At the end of the 10 week event, the sculptures were auctioned off to raise money for Wallace and Gromit’s Grand Appeal, the Bristol Children’s Hospital Charity. Leigh’s Gromit was decorated in typography representing unique Bristolian slang, hence the title “Bark at ee.”

Life in My Shoes by Daniel Weil and Naresh Ramchandani 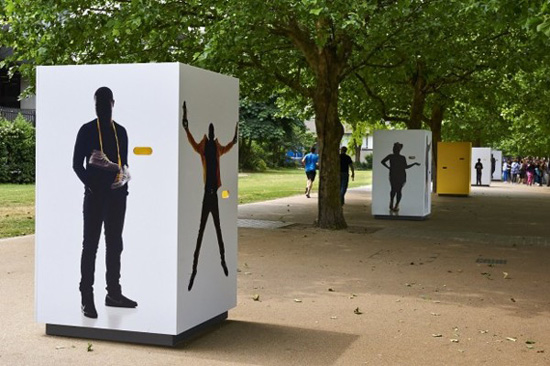 This public, outdoor exhibition Weil and Ramchandani created for the award-winning Life in My Shoes youth campaign by the HIV charity Body & Soul. The rectangular boxes include peep holes for reading about the experiences of different youth and their struggles with being HIV+. 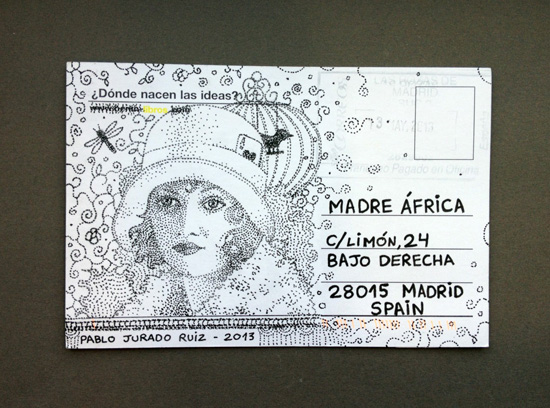 This unique campaign – S.m.a.l.l. – Send Mail, Art, Love, and Life – is asking artists from all over the world to mail postcards decorated with their art. The postcards are then printed and sold, and the proceeds go toward funding a school in Ethiopia to give local children a chance at a better future. Be sure to view the different postcards, since many are very inspiring. And be sure to mail your own if you too would like to get involved.

Art for Tots by Antonio Le_Marke 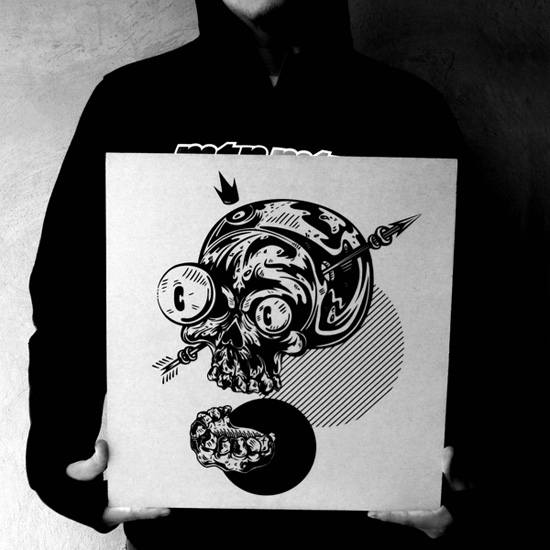 Antonio Le Marke was one of the artists that submitted artworks to a fundraiser for the charity Toys for Tots, hosted at Low Brow Artique Gallery in Brooklyn, NY. The illustrations were printed on wood panels for display in the gallery. The multi-discipline group show included lots of unique designs such as the one above. 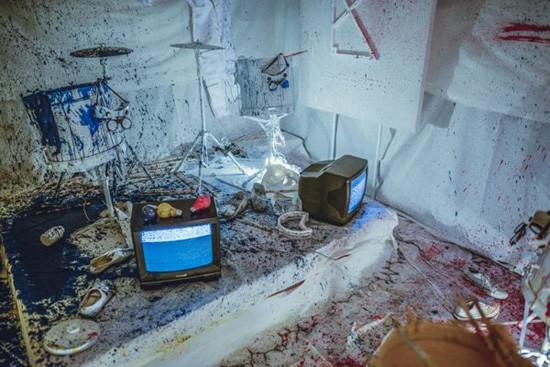 This installation art piece is an example of how chaos can be strikingly beautiful in its own way. Invited to be one of the artists in the Superconsciousart gallery in conjunction with the band “The KRRRRR,” Anya was a part of creating this piece titled “Third Eye.” The artists worked on this piece blind and urged viewers to use not just their eyes but also their emotions and heart to view the piece. The artists created this work of art after consulting with eye specialists all over Thailand and Asia. 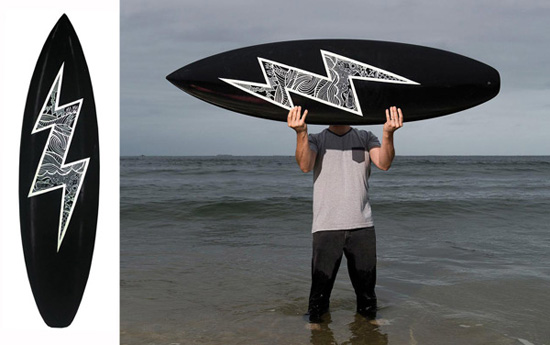 Christian Mugnai was one of eight artists to participate in painting designs on surfboards for the Local Motion exhibition. 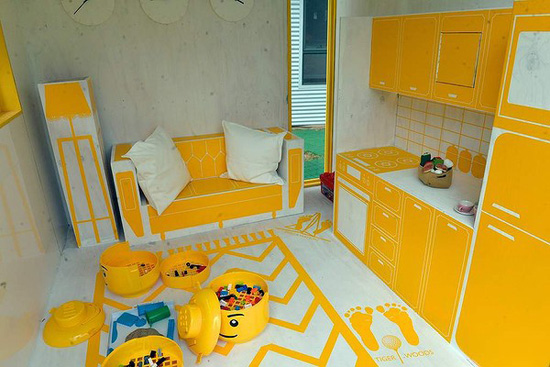 As part of the Kids Under Cover Charity Challenge, Holly Rickard designed and created a cubby for the International flower show. This public auction sold the cubbies to raise funds for KUC, and Rickard’s was awarded Most Melbourne and Most Innovative Cubby for 2014. Hers raised over $10,000, and included a karaoke machine, a glowing star LED ceiling, a color changing facade, solar power, off the grid, and a switch to operate the water pump for sil plants.

As the examples above show, any creative professional can get involved in charity work, using their talents to help create awareness for a cause. Photography, crafts, installation art, clothing and accessories, and more – all can be used to break people out of their own day-to-day and consider saving the planet or helping others in need. You just need to pick a cause that tugs at you enough to move you to action.

If you have ever used your art to raise awareness for a cause, share it with the rest of us! Let’s spread the word about positive movements of change in our world and help to create a chain reaction of kindness and compassion that continues to grow.

Tara Hornor
Tara Hornor loves writing about marketing, advertising, branding, web and graphic design, and photography. She is a Senior Editor for Creative Content Experts, a copywriting company that she owns with her husband.

How to charge for a webinar

How many questions to include in an online survey

7 items to include in every new hire packet