In his famous 1908 essay, ‘Ornament and Crime,’ modern architect Adolf Loos wrote: “The evolution of culture marches with the elimination of ornament from useful objects.” This pronouncement banished many of the frilly, decorative fonts of centuries past from the realm of High Design. Fast forward to the present day: Web 3.0 is awash in enough sleek sans serif and classic roman typefaces to make designers long for the typographic indulgences of yesteryear.

Harness the power of the antique and make your graphics pop with one of these vintage-inspired fonts, which have returned to the spotlight both in print and online. From the Wild West and Victoriana to the Avant Garde and Calligraphy, there are plenty of styles to choose from. Fonts have been grouped informally, with contemporary interpretations alongside (almost) original prototypes. All are available free for personal use, but please make sure to read the license agreements carefully.

Carnivalee Freakshow
This distressed, wood-type-inspired font has the shabby charm of an old sideshow banner. Equal parts macabre and cheeky, it is appropriate for graphics ranging from the irreverent to the horrific.

Circus Ornate
Dieter Steffmann’s Circus Ornate captures the spirit of classic circus graphics, but still stands on its own as an ornamental, boisterous display font.

Coffee Tin (similar to the Rosewood font)
Inspired by fonts like Rosewood and Ponderosa, which are modeled after the display fonts of the late 18th century, Coffee Tin reinterprets old-fashioned advertising graphics with contemporary clarity. 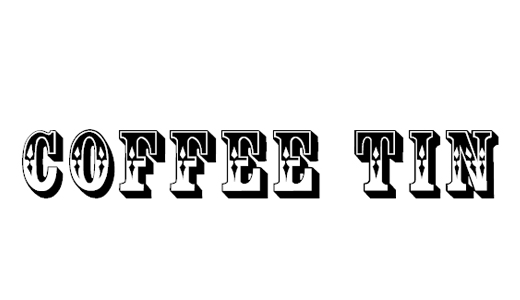 Dirty Ames
This is another beautiful distressed font that draws inspiration from 19th century display types. The Typeology foundry based this font and its name on an 1884 typeface by D.T. Ames.

Showboat
Shareware designer, David Rakowski, designed this font in 1991. 17 years later, its balance of monumentality and delicacy makes it a blast from the past that looks memorable in the present.

Tuscan
Rick Mueller’s Tuscan is one of his many vintage-inspired fonts, though its combination of sinuous contours and ample weight makes it memorable. This font has the flair of an antique display face without the fuss.

Fusty Saddle
Inspired by Sideshow, from Harold’s Fonts, Fusty Saddle is a hand-drawn, Wild West-inspired font made digital. Bittbox not only provides you with a font but a definition: “fusty,” according to their site, means “old-fashioned in attitude and style.” 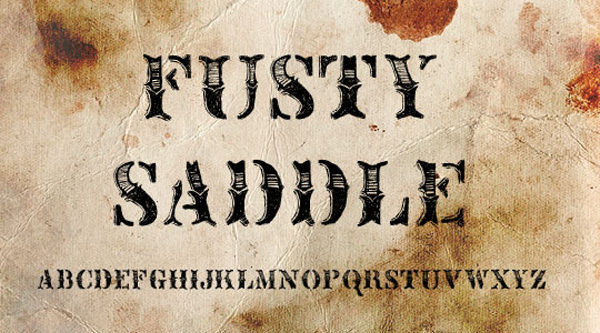 Nashville
This digital adaptation of wood-type, with a Wild West twang, was designed by Matthew Austin Petty of Disturbed Type. Like a cowboy’s stubble, rough edges and scruffy surfaces make this font a more masculine antique.

Azteak
From the independent digital type foundry, Fountain, Azteak combines traces of the past with dreams from the future. Underneath this font’s embellishments are mechanical footprints, adding a hint of steampunk.

AngeGardien
The name of this font is derived from the French for “guardian angel,” and its capital letters are indeed guarded by winged figures. AngeGardien’s combination of daintiness and strength, shared with other great vintage typefaces, might be what makes it worthy of protection.

Caslon Antique
Caslon Antique is what an original, 18th century Caslon type might look like now: a little worn around the edges, but no less steadfast. This interpretation of the classic Caslon serif adds age and wisdom to a text without sacrificing legibility.

Dominican
Another decayed antique face with loads of personality, Dominican is inspired by the time-battered beauty of antiquarian books.

Old Dog New Tricks
An unusual all-caps font, Old Dog New Tricks dips below the baseline to add interest to an otherwise classic serif. Its combination of Deco and antiquarian influence may make its pedigree murky, but remix culture dictates that the offspring of unexpected unions can create truly singular forms.

Cardo
Designed by David J. Perry in 2003, Cardo was created for scholarly use in classical and medieval languages. The slight angularity of this font recalls manuscripts and stone inscriptions alike.

Faith Collapsing
The shaky baseline and faded letters might make it seem disorderly, but this font is strong enough to support any layout that is incorrigible enough to merit it.

Kraut Type-A-F**k
Based on the title typeface for P.T. Anderson’s 2007 film, this font demonstrates the effect that the Wild West can have on a traditional blackletter.

Olde English
The Olde English typeface is an interesting example of how a typeface, despite its associations in one time and place, can easily become affiliated with another. Though its forms are inspired by medieval German blackletter types, Olde English is actually named for the Old English language—which was printed in Insular script.

Alte Schwabacher
The Schwabacher typeface got its name from the German village of Schwabach, and its appearance from manuscript calligraphy. Though it was used only occasionally in Germany after the 16th century, its legacy is central to the history of the printed book.

Fette Fraktur
Fraktur was used extensively in German printing up through the 20th century, and comes in many variations. Fette Fraktur is a heavy, relaxed version that manages to be legible to the Antiqua-trained eye without losing its distinctive appearance.

FLW Script
This font was designed to induce nostalgia for the early years of baseball, when stadiums were still named after neighborhoods and people. In the spirit of vintage baseball jerseys, this script is as jaunty as it is rugged.

ALS Script
With the abundance of handwriting fonts available on the web, it can be easy to forget that the simple script typeface has its precedents in centuries of practiced and often professional penmanship. ALS Script, with its balance and elegance, is a font worthy of this heritage: its forms recall the official handwriting of the 18th and 19th centuries.

Adine Kirnberg
Despite Loos’ warnings against ornament, the decorative curlicues of Adine Kirnberg do not disrupt its readability or its effectiveness. This well-designed cursive, with its delicate hint of the antique, is not mere wedding-invitation fare.

Ecolier
This upright cursive is as architectural as it is ornate. The Deco-tinged contours of Ecolier seem to draw their inspiration from the delicate curves of calligraphy as well as the towering forms of modern engineering.

Olho de Boi
According to designer Billy Argel, Olho de Boi is a font inspired by the first Brazilian postage stamp released on August 1, 1843. The idiosyncratic scratches and loops make this script seem to come straight out of old letters.

Treasure Map Deadhand
There may only be one International Talk Like A Pirate Day, but why not write like a pirate every other day? This font is aptly named: the pirate-inspired scrawl resembles the waterlogged italics of a lost treasure map.

Fletcher Gothic
From Casady & Greene, Fletcher Gothic is an Art Nouveau font with clean lines and striking details: use it to bring turn-of the-century style to this century’s graphics.

Hadley
The curvilinear forms of this font recall the plant-like contours of Art Nouveau. Hadley brings an organic quality to text that allows it to refer to the past without losing its contemporary relevance.

Secesja
If Alphonse Mucha had designed a font, Secesja might be it. Sinuous serifs and spiraling ornaments make the letterforms burst with life.

Trinigan
In the early 1900s, Charles Dana Gibson’s pen and ink drawings of corseted women with bouffant hairstyles came to be known as “Gibson Girls.” Trinigan, with its undulating arms and hourglass stems, revives this classic figure in typographic form.

Parisian
George Williams’ Parisian font at once evokes a sidewalk café, a theater marquee, and the hushed crackle of a phonograph.

Bodoni Ultra
Though there are many modern revivals of Bodoni’s original typeface that align it more readily with Times New Roman than times past, Bodoni Ultra is a striking exception. The dramatic alternation between thick and thin strokes echoes Chauncey H. Griffith’s 1929 Bodoni Poster typeface, used widely in popular print media.

Sesame
Jugend magazine, the publication that helped launch the German Art Nouveau movement (“Jugendstil”), was a trendsetter when it came to the graphic and decorative arts of the late 19th century. Sesame is a font in the spirit of a Jugend cover: lavish, distinctive, and eccentric.

Conga Line
Betty Boop meets Broadway in a Conga Line: the 1930s charm of this font comes from its blend of cartoonish bounce and cinematic monumentality.

Enigmatic
Enigmatic and Waukegan echo the softened rectangular shapes of Bell Gothic, a typeface commissioned by AT&T in the 1930s for use in telephone directories. Bell Gothic was and is a highly recognizable typeface that has been used for avant garde as well as popular graphics.

akaChen (in the spirit of Clarendon)
This font bears a marked resemblance to the Clarendon typeface, which was first designed in the mid-19th century and has been used frequently in display work.

Pardoes (echoes De Stijl typefaces)
Reminiscent of De Stijl artwork of the 1920s, such as the paintings of Piet Mondrain, Pardoes is abstract and geometric without being illegible.

Agit Prop
A font in the spirit of Soviet Constructivism, Agit Prop is intended to convey the graphic essence of Bolshevist agitation and propaganda. Whether or not you agree with the politics behind the design, it’s difficult to deny this font’s stark and monumental beauty.

Houseind
Probably one of the largest type foundries specializing in vintage typography.

How to start an online boutique