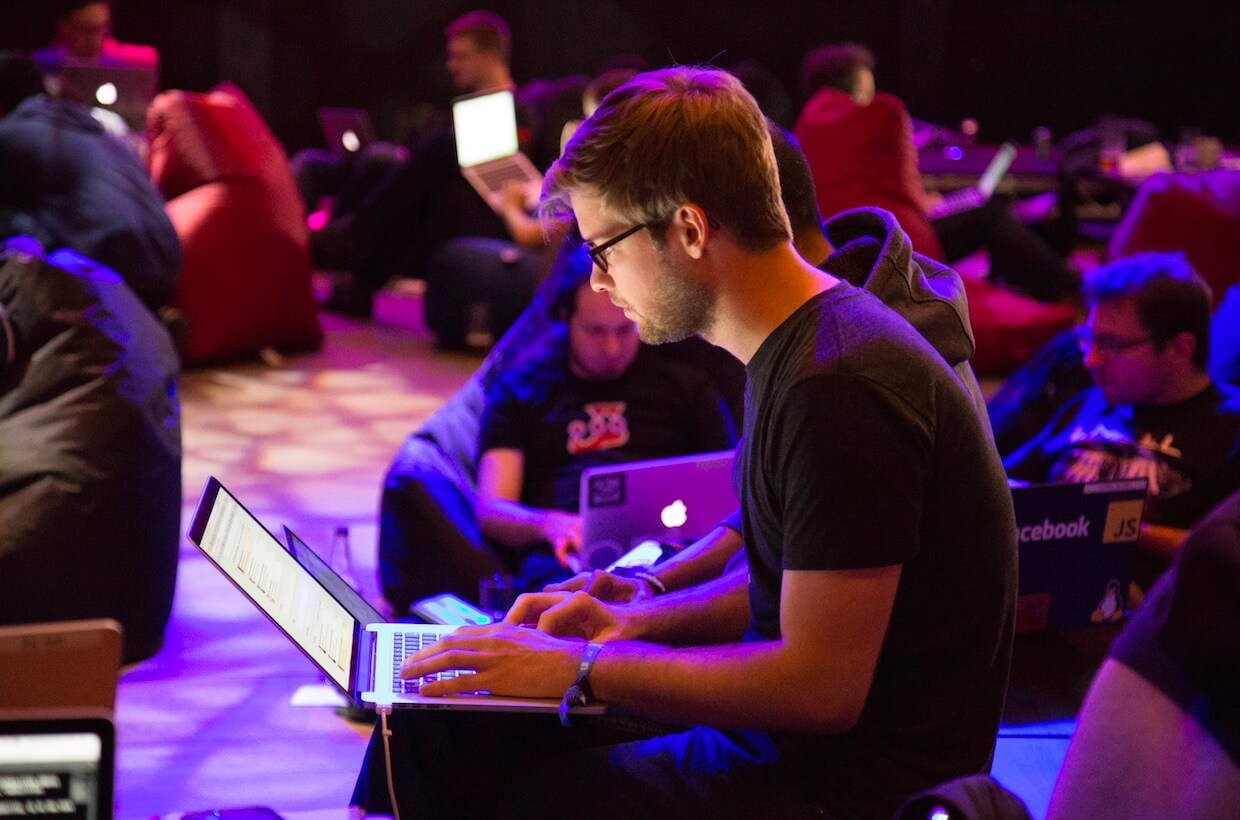 Sprint without losing your sanity

How hack weeks can encourage innovation and creativity

The “tortured genius” is a creative cliché.

Books, films and pop culture tell us that innovation only comes from wrestling, alone, with a big idea or problem.

The startup version of this narrative involves a product genius who spends weeks in isolation, creating a Homeland-style pinboard of notes and images.

The designers work for a while (ignoring most of those specs), then hand a prototype over to the developers. Months later, a thin and watered-down product is done.

It’s fine. Everyone shrugs and says “we did what we could.”

Sound familiar? This working style is also called the waterfall model — and as you probably guessed, I don’t think it’s effective.

I’m a firm believer in agile product development. More importantly, I believe that your team can be your best source of innovation.

If you’re tackling a creative challenge, don’t isolate yourself or your key people. Instead, get everyone involved and engaged in the process.

Innovation is an inside job.

A week of immersive exploration

At our company, we love hack weeks. These are five-day sprints that allow our product teams to focus exclusively on a single idea or problem, without worrying about day-to-day tasks or to-do lists.

Hack weeks are directly responsible for some of our biggest innovations, including the new Jotform Cards which has been our biggest release in our 12 years history.

Here’s how we run them, and how you can use hack weeks to inspire creativity, collaboration and originality.

A couple years ago, we started doing one-day hackathons. We were inspired by other tech companies that popularized these sprints.

A day never felt long enough, so we added a second day, which often stretched across the weekend.

I started to feel like the “fun challenge” was becoming a gimmicky way to wring more hours from people and add undue pressure (which wasn’t the intention).

Eventually, we settled on Monday through Friday hack weeks that don’t eat into personal time.

Try to set a timeframe that excites your team without leading to burnout.

If a hack week is too long, the project blends into regular work responsibilities. If it’s too short, teams can’t create a working prototype — and that’s always our goal.

It doesn’t matter how you build the model, and it doesn’t have to scale for 1,000 users. We’re cool with some duct taping.

But, aim to end the week with a functional prototype.

Teams that include people from every different role are always more powerful.

If you’re trying stretch the boundaries, you need diverse skills and voices at the table.

Designers should work with developers, product specialists, UX and UI experts, and anyone else who can contribute.

When ideas flow back and forth, no one’s fixated on how the prototype looks or how to code the features. The group considers every angle.

We’re talking four walls and a door that closes.

This small detail helps not only if there’s a competitive element to your hack weeks (more on that later), but also to help teams focus solely on the task at hand.

Instead of running from their desks to a meeting room, a dedicated space lets people talk openly and encourages deeper collaboration.

4. Set aside other responsibilities

A hack week should feel like being on an island with your team (in a good way).

It can strengthen work dynamics and personal relationships. That’s why we try to ensure the participating teams can focus in peace. The rest of us can hold down the fort.

Very rarely, something urgent comes up that requires a project break. We’ll take care of it and then get back to work.

It is critical, of course, to ensure that these creative explorations never get in the way of serving customers. That’s also why I don’t recommend scheduling back-to-back hack weeks.

Build in some breathing room between each sprint.

Constraints breed creativity. That said, there’s a fine line between feeling cornered and getting lost in the woods.

We’ve tried several different approaches. For example, our first hack week of 2017 focused on the essence of our product: What makes a good form? And what makes a great form? These are the questions we explored.

We’ve also done serious, technical explorations and wild-card hack weeks, where everyone looks 10 years ahead and builds for the future. If you’re not sure how to start, think about where you want to innovate:

What’s the core of your business?

What could make the biggest difference to your customers or users?

What would really change the game?

Use those broad focus areas to develop a more specific question, problem or challenge.

Competition is not code for fighting. Everyone should play fair. At the same time, it’s good to encourage some friendly rivalries.

A sprint project, for example, could divide up different parts of the same problem and ask teams to develop a solution.

Each group “owns” a piece of the puzzle, but they’re ultimately tackling the same challenge.

There’s competition, but also a sense of shared experience.

7. Finish with a demo day

During every hack week, I always look forward to Thursday afternoons. The office feels energized and slightly electric.

Teams are in deep concentration, polishing up their work and preparing for the Friday presentation, which is an essential part of the process.

If there’s no final lap or finish line, the experience feels incomplete. It falls flat.

Be sure to create some kind of review, demo or presentation for the participating teams. Let them show what they’ve developed and field questions.

This can also be a great way to see new opportunities, based on how other employees and participants react to the demo.

The benefits of running a sprint project

Even if you don’t have multiple product teams, or enough people to run the business during the sprint project, it’s important to block out time for innovation.

It won’t happen by accident. You need dedicated time, space and focus in order to move the needle.

Creative exploration is powerful. If you’re still on the fence, here’s why it’s time to plan a sprint project ASAP:

Internal competition also reveals strengths and weaknesses; teams see where they shine and which skills they could improve.

2. They make your company more fun

Sometimes even interview candidates will say they’ve heard about our hack weeks and look forward to participating in them.

Nothing builds culture like working toward a shared goal.

Sprint projects are exciting and motivating. They also give our employees a chance to set aside their day-to-day responsibilities and expand their skills.

3. They allow you to experiment

I often mention that Jotform is bootstrapped. If we had outside funding, we’d be rushing to hit targets. There wouldn’t be space to dream and explore.

But in my experience, hack weeks actually save us time. Without them, we’d be working on the wrong things.

We’d get stuck behind other players in our highly competitive industry. And we wouldn’t achieve our potential.

4. They promote agility and creativity

It’s a point worth repeating. Instead of that tortured genius sitting in a room, struggling to solve creative problems, there’s magic in collaboration.

I’ve watched it happen many, many times — and I’m sure you have, too.

Ideas develop and take shape faster, and everyone gets a chance to become better.

That’s worth every hour of our time.

Why You Should Launch a No-Code Startup

How to Keep Exercising Your Innovation Muscle — During a Pandemic

How to Show Your Customer Obsession

Why the Biggest Innovations Come From Boring Problems

Solitude: the secret to original thinking