Unsplash: Big Update for the Free Photo Platform Makes it Even Better

By now, Unsplash can call itself one of the largest, and most vivid photo communities out there. In the beginning of 2017, it was announced that Unsplash was hived off to become its own company. Now, a significant feature update that will further boost the platform’s growth has been released.

Unsplash and the Unexpected Success

It all began with a regular Tumblr blog, to which a man called Mikael Cho uploaded ten free images every ten days. This was in the spring of 2013. Soon, the success descended on Cho and his allies. A few weeks ago, I wrote down the stations relating to the spinoff of Unsplash Inc. in this article.

A few weeks after the company’s inception, Mikael Cho turns to his supporters via email, and Medium article again, announcing a large update of the service. You may remember that, in the beginning, there were no categories or a search function. Of course, all of that is available today.

Now, Unsplash takes the next step, which is a step towards becoming a social network, which is a logical step with a self-conception as a community. Unsplash introduces the following features:

Now, it’s possible to follow other members. This way, an according stream will give you live information on what the people you follow are currently doing on the platform. This ranges from liking to adding new photos. Your following-stream will display all of these activities in a clean way.

In the stream, images are displayed as a grid, which saves space while making it look modern and more pleasant. The feature is called Photogrid, and there’s an in-depth presentation right here. Photogrid is the new type of presentation for the following stream, and all other future streams, except for the traditional home, and news streams.

According to Unsplash, the unique advantage of the following function is that photos can be spread a lot faster than before. Photographers don’t have to wait for their new images to be discovered, and, depending on the amount of followers, enjoy immediate interactions.

Aside from the option to follow individual members, you will be asked to name at least three categories of images that you’re especially interested in upon starting to use the following function. I chose “People,” “Technology,” and “Street Photography.”

Based on these categories, Unsplash suggested a solid dozen of photographers that mainly bustle in these sections. I followed all of them. Let’s see how that turns out. 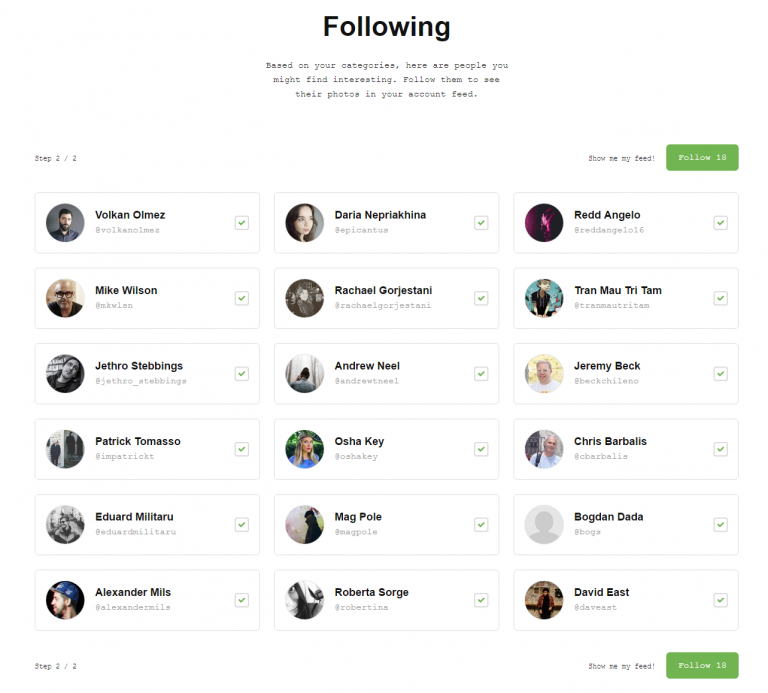 Unsplash Following: Unsplash Gives You Suggestions For People to Follow Based on the Chosen Topics. (Screenshot: Noupe)

The following stream is already available in my Unsplash account. What about you?

Unsplash notifications work like notifications on Google+. On the top right, next to your profile icon, you’ll find the new bell icon. However, it is not available in my profile yet. According to Mikael Cho, this feature is currently being rolled out internationally. This might take some patience.

A click on the bell opens a small notification overlay. Here, you’ll see new followers, who likes your photos, which collections your image was added to, and more. According to Cho, notifications were one of the most requested new features.

Unsplash Stories lets photographers provide more information on their photos. If a story is available for a photo, you can access it by simply scrolling down on the photo’s detail page.

I have tried it with a dozen of new images, but I couldn’t find a single story. Generally speaking, the idea of providing context to the sheer image is exciting to me. This serves the community idea.

The Rest: Unsplash S and Local

Unsplash S is not literally a feature, but rather a promise of fast performance. In the background, the code is constantly being tweaked. In comparison to previous versions of the service, the success up to this point is impressive. In my browser, Unsplash runs entirely smoothly. Using it is fun.

Unsplash Local is not a new feature either, but instead, it’s the promise to unite the community at a local level. This is also supposed to be done via local events in different parts of the world, like Switzerland and Japan. Events can range from photo walks, workshops, or plain community parties.

Conclusion: Unsplash Has a Lot of Plans

The most recent feature update moves Unsplash closer to communities like 500px. However, Unsplash offers the invaluable advantage that all images are free to use. This is not the case for most of the competition.

The social aspects of the service are sure to cause further growth. It’s also safe to assume that the commitment of the users will increase drastically as well.

How to hire an influencer

What to do when an employee resigns

How to create a successful B2B marketing strategy

What is the bug life cycle?

How to do breakout rooms in Zoom

The ultimate guide to web chat for business