Creating and adding your own forms to Facebook is not an easy task because of the amount of restrictions on FBML (Facebook Markup Language) and FBJS (Facebook JavaScript). This meant generating completely new form and javascript code just for Facebook.
Our Facebook Forms also had many problems on Internet Explorer. The forms were not aligned properly. This problem is also resolved on the new version. Your facebook forms will now look gorgeous.

Although this is a major improvement, there are still some features not available on Facebook Forms. Such as conditional logic, multi-page forms, payment total calculations and Form Collapse. We hope to make these also available in the coming months.

There have also been some changes on the Facebook interface. So, we have updated our documentation on Facebook Forms. If you have a JotForm form on your site we recommend getting new form code and updating it. To take advantage of the new features, all you need to do is go to Share > Advanced Settings > Facebook to get the new facebook source code. 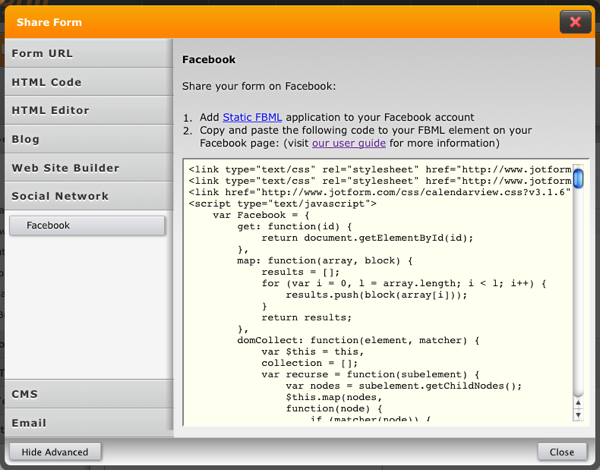 JotForm is now simply the best way to create forms on Facebook.

How to create a PPE request form

Tips on how to collect bill payments using JotForm