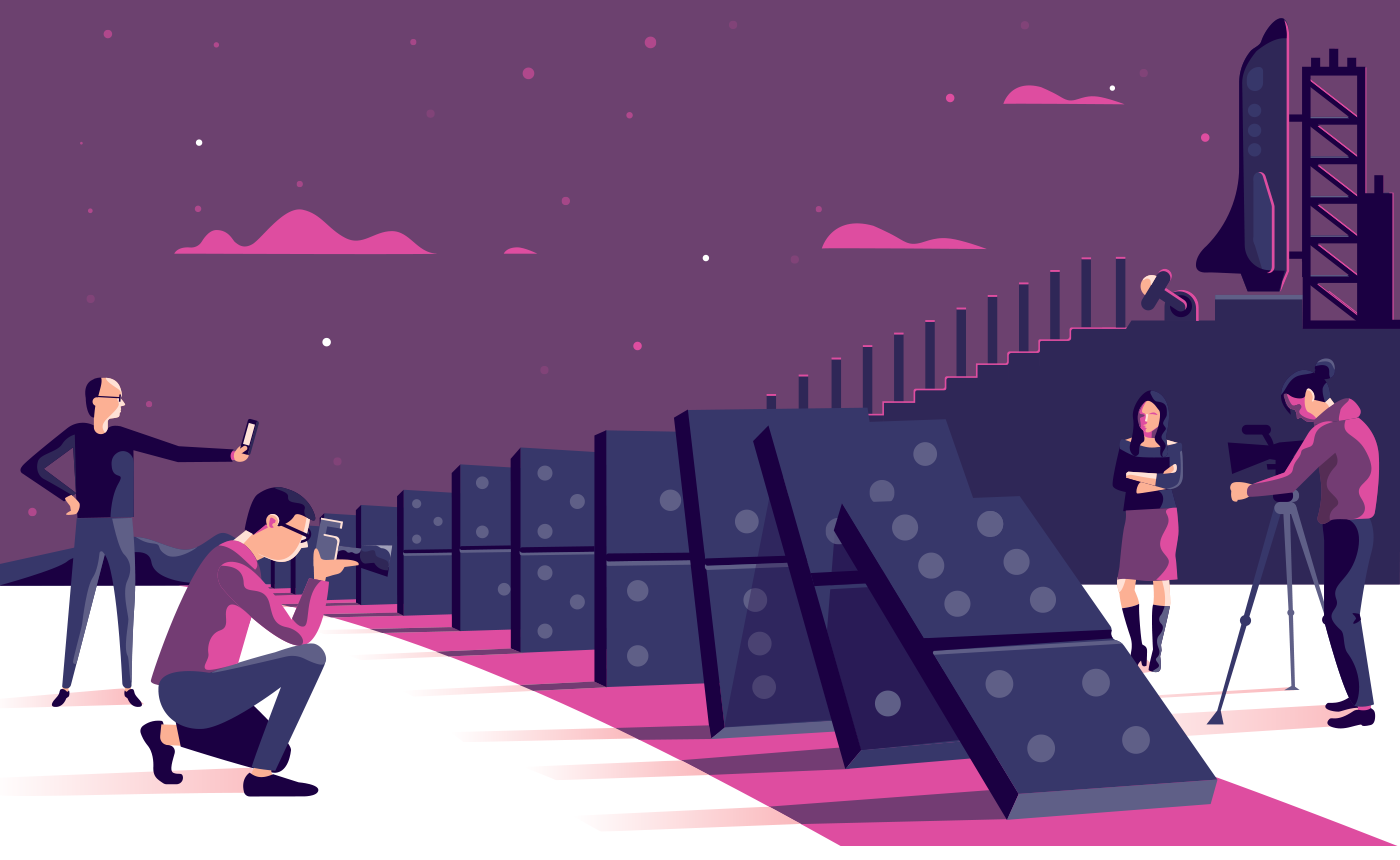 How to launch when everyone’s watching

It’s not easy to hear that your product is ugly.

Or that it’s confusing and out of date.

Sure, the internet has its share of “haters” and trolls who love to hurl dumb insults, but sometimes that negative feedback has merit.

In 2016, I knew the critics were right. Jotform was 10 years old, and our forms were looking tired.

To be clear, everything was running smoothly under the hood. We were constantly releasing updates and improving the functionality.

But I was conflicted. I knew a major product change would also require a big launch — and the game had changed for us.

It’s easy to launch when you’re just starting out. You can make endless mistakes when you’re working in the shadows. Once you have 3.2 million users and a 12-year track record, the stakes get higher.

I also knew it was time to revamp the Form Builder. It’s the core of our product, after all.

The critics motivated us. Following months of hard work, we released the new Form Builder in early 2017.

It worked. The new version drew almost a million new signups throughout the year. Revising the builder accelerated our business, but it also helped me to solidify our launch formula.

Whether you’re launching in the dark or under a blazing spotlight, founders need a clear strategy to determine:

Here’s what I’ve learned after 10 years of trial and error.

1. What should I launch next?

Start by digging into your business data

In 2016, we listened to the critics and spent the year overhauling our Form Builder.

As the calendar flipped into 2017, I was excited about what we had learned and created. I wanted to tackle another big project.

I conducted a SWOT analysis and examined our site traffic. Our customers use over 3.5 million forms every day, or about 90 million per month. Forms are our biggest draw, by a landslide.

So, we spent 2017 re-imaging forms and recently launched Jotform Cards.

Talk to your customers — and ask strategic questions

For 2018, I wanted our users to shape the next big project. We interviewed dozens of customers and asked:

What is the biggest challenge you face in your business?

What is the biggest problem you face with our product?

If you’re on a bronze plan, what would it take for you to upgrade to gold?

Specific and tangible (yet open-ended) questions can help you to uncover opportunities and needs.

You can see where customers struggle with your product, or where a new offering would improve the user experience.

Note that we didn’t ask, “what do you want from our product,” because most people don’t have a clear answer.

After all, were you craving a visual social media platform before Instagram came along? Were you asking to stay in strangers’ apartments before Airbnb?

“If I had asked people what they wanted, they would have said faster horses.”

If you’re a founder or entrepreneur, it’s easy to think you have to hibernate in a cave and emerge with all the answers.

Instead, your team should help you to choose major projects and launch goals. If you don’t have a team, share your project with a couple trusted friends or colleagues.

How do they respond? What do they say? Are they visibly intrigued and excited or does the vision fall flat?

You’re the leader and you get to decide, but great ideas are often highly contagious.

In a previous post, I wrote about taking walks with our new employees and current team members. We’ll talk about plans for the year and I ask for their feedback.

Seeing genuine interest tells me I’m on the right track.

So, what should we launch next?

To recap, these are the strategies that guide our big projects:

2. HOW do I launch the next version, feature or product?

In the first 10 years of Jotform, we tried two different launch tactics.

Originally, we worked in silence. We toiled away behind the curtains and then one day, voila, we unleashed our new creation.

That was a disaster. Working in a vacuum prevented us from gathering important feedback. The release was messy and littered with bugs. Customers got mad, and many asked to revert back to the old version. Some even left us.

Then I discovered thought leaders like Eric Ries and the Lean Startup approach. I was inspired by the practice of continuous improvement. We switched tracks and released every tiny, incremental change. Upgrades happened behind the scenes without any fanfare.

Undercover releases don’t get any PR. You miss the chance for coverage on blogs, tech sites and even mainstream media.

Our work also went unnoticed by customers. People thought we weren’t updating the product, even though it was happening several times a week.

It was time for a hybrid approach. Now, we do big, splashy annual launches and ongoing improvements. Here’s why I believe it’s a great strategy.

We listen and try to improve. And if the new version is really broken, we’ve only angered a small portion of our customer base.

We never want to upset people, of course, but limiting our exposure is like riding a bike with the training wheels on. It’s much safer for everyone.

Launching is a team sport

The hybrid model works because we have smart people who can manage all the details. I try to work primarily on strategy, while our developers, designers, UX specialists and other experts focus on what they do best (and do far better than me).

Collaborative teamwork has helped us to make dramatic improvements in the last couple years.

At least two months before the release, we create a pre-launch, launch day and post-launch plan. Everyone maps out their tasks and responsibilities, then we work backward to make sure it all gets done.

Staring early ensures that no one’s tearing out their hair on the big day. I don’t want my employees pulling all-nighters or going crazy before the launch.

Our stress levels might rise as the deadline approaches, but no one reaches a full-scale panic.

Detailed, early planning also prevents you from forgetting something big — and you still have time to implement all those creative ideas that you come up with in the shower.

There’s time to polish your work

New products and versions have lots of bugs. They just do. You can’t avoid them, but you can target them more effectively.

Our development team gets a daily email of all the open bugs. We also keep a running scoreboard. The oldest tickets have to be solved first (that’s the rule), but the developers compete to see who can fix the most bugs each week.

We’ve tried to gamify our launch preparation and make sure we’re still having fun.

We still release ongoing updates, but the launch is a chance to shine — and the cliché about first impressions exists for a reason. You only have one chance to make it work.

Think about an Apple-caliber launch. They’ve set the bar high by unveiling new products that look beautiful and works seamlessly. They also anticipate our desires. We can all aim to reach that standard.

You can personalize the PR

As we get ready to launch Jotform Cards, for example, they’re busy preparing personalized emails and outreach packages for tech reporters — and “personalized” is more than just switching out the name on the email.

The goal is to make real connections with people who regularly cover your corner of the industry.

Hybrid releases can help you to establish a success metric

We’ve talked a lot about gathering feedback and listening closely to customers, but how do you know if a new product version is successful?

What are you measuring? At Jotform, we’re looking for activation rates. If 100 people sign up, how many are using the software a month later?

We started showing Jotform Cards to a small group of new users back in September. At this point, about 200,000 people have seen it.

This limited release provides activation data for comparison against the current product. We can see which version promotes higher activation rates — and then we can dig into the why and how.

We’re always testing behind the curtain as we prepare for the big launch.

What difference will you make?

As you consider what and how to launch, I left out one important detail. I always ask myself, “what will have the biggest impact?”

And if I’m feeling really bold, “what could change the world?” I realize that web forms won’t end global hunger, but I am still earnest about this question.

Your work matters. Your time is precious — and you have the chance to equip people with something great.

Here at Jotform, we’re excited to show you what we’ve changed: here is Jotform Cards.

What is a kanban pull system?

Why the Biggest Innovations Come From Boring Problems

How to create a visual product roadmap

What Is a Product Roadmap?

7 types of software bugs and errors