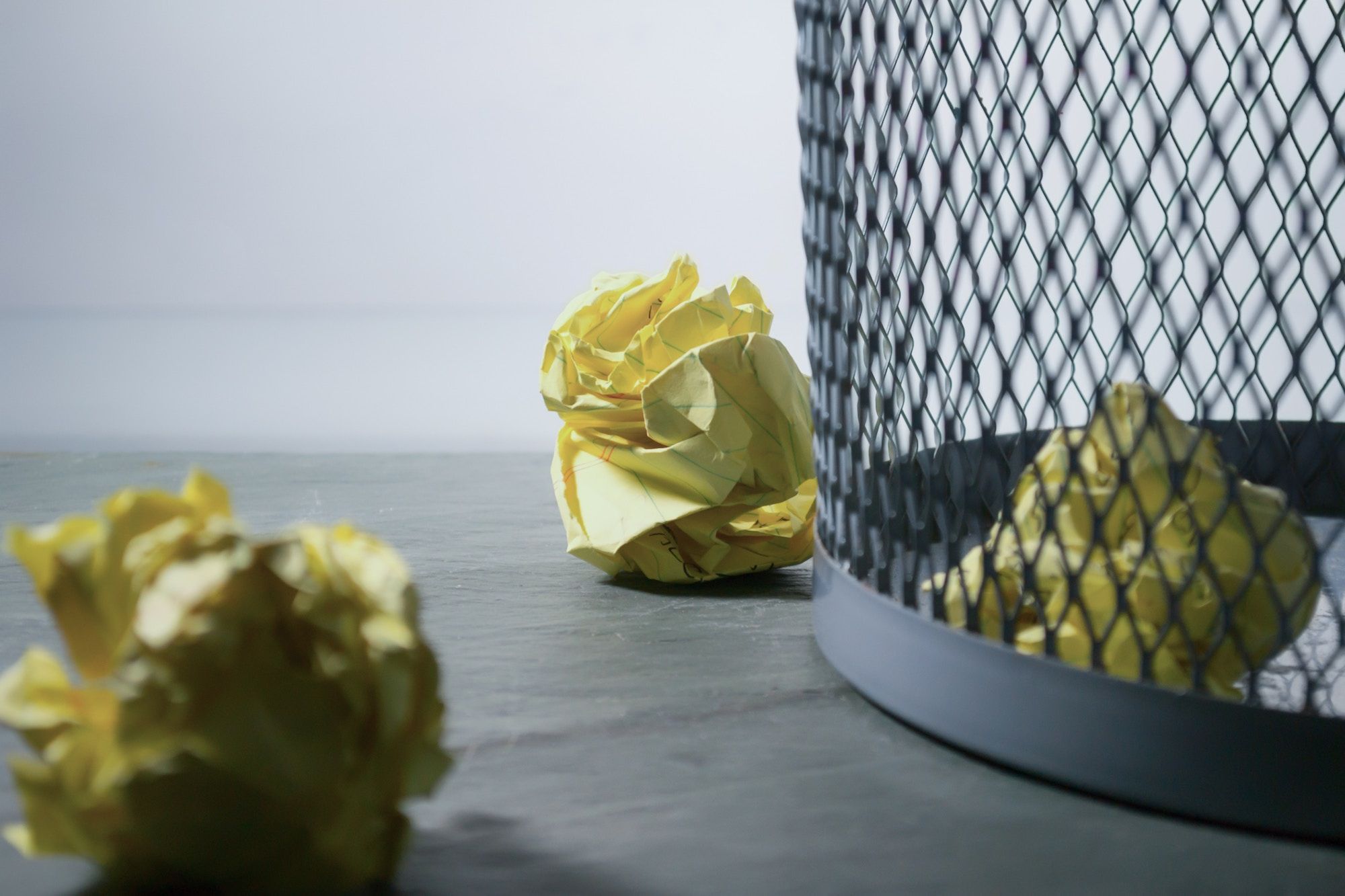 Recently, I stood in my closet deciding whether an old gym T-shirt brings me joy.

I was following the advice of organization expert Marie Kondo, whose bestselling book “The Life-Changing Magic of Tidying Up,” has swept the world.

According to Kondo, we can tidy up our homes, and our lives, by deciding whether each of our possessions sparks joy — and getting rid of anything that doesn’t.

In a world that seems determined to make us consumers, there’s a contrasting wave of minimalism — people desperately want to cut the non-essential. Freed of excess clutter, people find joy, inspiration and, of course, their stuff.

The same is true of the workplace, and I don’t mean just cleaning your desk (though that’s one of my six daily habits). I mean taking a hard look at your bigger goals, choosing your top priorities, and ruthlessly eliminating everything else.

Just as paring down your domestic life can make you happier, narrowing your focus at work will lead to both increased satisfaction and productivity.

Don’t just take my word for it: some of today’s greatest minds are firm believers in the magic of tidying up your priorities.

The power of saying ‘no’

Let’s face it: it feels good to say “yes” — to be the person who always delivers. But what often divides successful from very successful people is their ability to say “no.”

“Not just haphazardly saying no, but purposefully, deliberately, and strategically eliminating the nonessentials.”

Indiscriminately pursuing more diffuses our efforts and ultimately derails us from achieving our larger goals.

Bestselling author and Food Network host Ina Garten has amassed an estimated net worth of more than $40 million, according to Forbes.

Her recipe for success? At a Forbes Women’s Summit, Garten explained that if an offer doesn’t align with her brand’s vision and values, she will turn it down.

When I first started Jotform, without venture capital or investors, I wore every hat. I spent my days extinguishing customer service fires, leaving me little time to focus on growing the business. I was doing so much — and yet I felt like I was spinning my wheels.

Though I learned a lot from those early days, they made me realize:

Consider the difference between speed and velocity: while speed measures of distance over time, velocity is displacement. When measuring speed, you can still run in circles, but velocity measures actual progress. We want to focus on velocity, not speed.

The pros of sticking to your priorities

Building a brand means being relentlessly selective about the opportunities you accept.

If you choose and stick to your priorities, you’ll be more productive on a daily basis, too. I’ve written before about the perils of multitasking: Shifting between tasks can consume as much as 40% of our productive time.

That’s why, in my daily work, I always have three concrete priorities. Currently, they are:

These priorities guide everything I do. If a project or an opportunity doesn’t match one of them, I say no. I remove unnecessary deliberation from the situation and eliminate distractions so I can make real progress.

Economists and psychologists have found that too many options can even paralyze people or push them into making illogical decisions.

In a clever experiment, Columbia University professor Sheena Iyengar set up a booth to sample jams at a California market. Every few hours, she alternated between offering 24 jams and six jams.

Iyengar found that 60 percent of customers were drawn to the large assortment, while only 40 percent stopped by to check out the small one. However, 30 percent of people who sampled from the small assortment bought jam, while only 3 percent of those faced with two dozen flavors purchased a jar.

As Professor Iyengar explained, “people might find more and more choice to actually be debilitating.”

It’s no surprise that choosing a focus makes people happier, too. A study of over 4,000 working professionals found that sticking to a daily “MIT” (most important task) was correlated with higher levels of energy and happiness.

On a larger scale, a priority surplus can hurt your company’s bottom line. In a recent survey of 1,800 global executives, 64% said they have too many conflicting priorities. The researchers found that as an executive team’s priority list grew, the company’s revenue growth declined relative to its peers.

In sum: too many goals can sabotage your momentum.

How to choose your priorities

Setting your priorities demands a game plan, and there are numerous lists, matrices and charts to help you get started.

The Eisenhower matrix, for example (named after the industrious former US president), is a popular tool that identifies priorities based on importance and urgency. Tasks that are neither important nor urgent, are eliminated.

Urgency, however, can be a slippery slope. Too often we fall into the trap of hyper-focusing on the time-sensitive.

And it’s understandable — we feel instant gratification when we knock out a task, rather than saving it for a later date or taking the time to delegate. That’s why “inbox zero” is such an attractive concept. It’s satisfying to feel like you’re working from a clean slate.

Less important tasks also expand to fill the time. That’s why we need to focus on what’s essential.

For example, my son recently started kindergarten, and I decided to pick him up at 5 pm each day. Yet, I was used to staying late. If I had an overflowing inbox, I’d often stay until 8 pm to clear it out. Now that I have to leave the office at 4:45 sharp, I’m better at choosing and completing my top priorities.

If you still find yourself prioritizing time-sensitive rather than essential tasks, you’re not alone.

In a series of studies published in the Journal of Consumer Research, people typically chose to complete tasks with very short deadlines, rather than tasks with less pressing deadlines that were just as easy and promised a bigger reward.

But as I said before, when we focus on urgency, we end up putting out fires all day, instead of accomplishing what matters most.

Does that mean we should forget urgency entirely?

Not exactly. But I’ve found that I can delegate a lion’s share of urgent items.

I tend to agree with the experts who recommend choosing your priorities based on contribution and passion — the objectives that motivate us and give us a greater sense of purpose. And I would add importance to that list.

To choose your priorities, ask yourself:

Next, taking a page from Warren Buffett’s strategy, write down 25 goals, then circle your top 3–5. Whether you choose three (like me) or five (like Buffet), it’s important to ignore the other items at all costs.

You don’t have to abandon your other goals altogether — but set them aside until you can give them your full, undivided attention, perhaps at a later date.

Looking back at my priorities, hiring great people is critical. I won’t delegate that responsibility to anyone else — especially when we’re hiring for key positions.

My goal of equipping users to work more productively falls between contribution and importance. Creating quality content, however, is my passion. Focusing on this priority energizes me to work more fervently on the others.

If something is not a priority, I either delegate if it’s urgent, or avoid it completely.

Building priorities into your daily routine

Periodically, we need to step back and re-evaluate our priorities. Once you’ve chosen yours, it’s important to build them into your daily routine.

That means blocking out uninterrupted time to work on your focus areas: turn off alerts, set up email auto-replies, and create quiet zones. Fiercely protect your workflow.

As Greg McKeown suggests, if you don’t prioritize your time, someone else will.

For many people, mornings are their prime time for deep work. I spend the first two hours of every workday writing out my thoughts and ideas, as they relate to my priorities. I don’t book meetings during this period and I wouldn’t think of checking emails.

Finally, communicate your intentions with your colleagues, so they know what to expect from you (and when they shouldn’t expect anything from you).

You may feel uncomfortable sharing your newly-prioritized work life with a manager, who has other plans for your time. But if you clearly explain how your goals align with the company’s big-picture agenda (or your manager’s agenda), chances are they’ll respect your commitment.

Tidy up your priorities and see what happens. It can truly be a game-changer.

How to Prioritize Tasks

Ask yourself: What’s mission-critical and what’s a waste of time?

Escape the tyranny of the to-do list: how to schedule your priorities, not your time