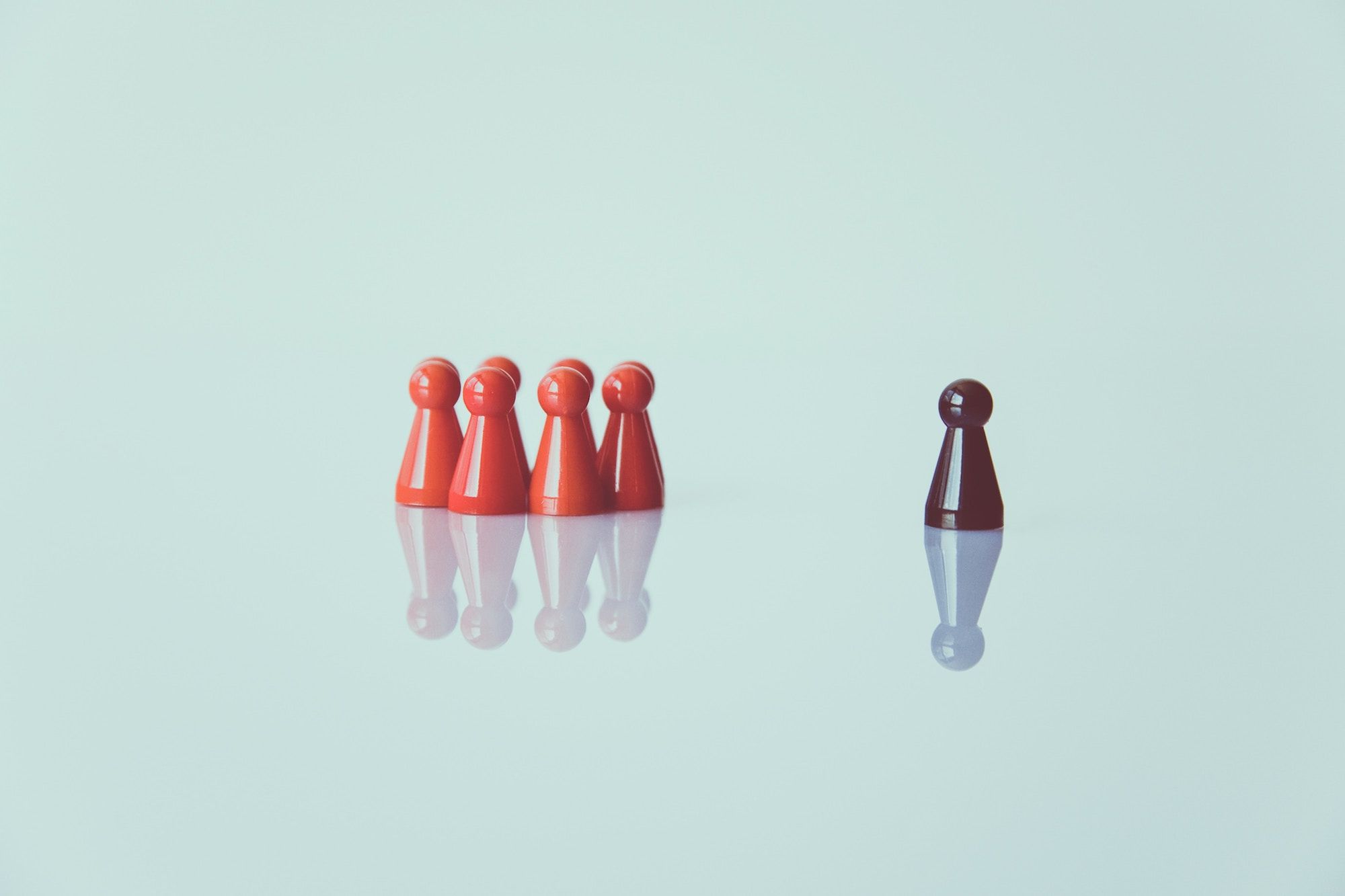 A tale of two managers: why top leaders practice the ‘middle way’

I leaned back in my chair and glanced around the room. The office was tumbleweed quiet. When had Steven last stopped by? I couldn’t remember.

It was the late ’90s, and I was working for a New York-based media company — my first job after college. My manager, Steven, was rarely around. Sometimes we didn’t meet for months.

I was a junior developer, so he seemed to think my work was inconsequential. He assigned vague, low-stakes projects and then left me alone.

I felt lost and frustrated.

The problem actually improved after the dot-com crash. Many of my co-workers were (unfortunately) laid off, so those of us left standing had to step up. Big time.

New managers soon gave me ambitious work that mattered to the company. It was challenging and invigorating. Most importantly, people now cared what I delivered — and soon, I did too.

Albert rolled his chair up next to my desk. “Aytekin, let’s chat.”

I took a deep breath and grabbed my notebook. This happened at least twice a week, so I knew what was coming next.

Scribbling furiously, I nodded and tried to absorb his rapid-fire feedback.

“You’re using the IDE as a build tool.”

“Did you plan the code? No. I need to see you map the problems first.”

It went on. And on. Yet, by the end, we were both smiling and laughing.

We had worked through the problems, and I also learned that Albert was an avid snowboarder. He asked about my family’s olive trees and suggested a natural insomnia remedy.

Albert was tough. He constantly tore down my work, but he also showed me how to build it back up again. Most importantly, Albert cared about what I was doing — and he was interested in me as a person, not just an employee.

He was the best manager I’ve ever had.

Three ways to manage and lead

When I left that media company 12 years ago to start JotForm, it was just me and my laptop (and a lot of Starbucks coffee).

As the company began to grow, I had to learn how to lead our teams. I stumbled at times, but I always remembered those early management experiences, both good and bad.

After years of research, personal experience, and conversations with smart colleagues, it became clear that nearly all managers fit into one of three categories:

Whether we’re leading a team of three or 300, it’s helpful to understand the two management extremes — and how to find a more productive, motivational middle ground.

My first boss, Steven, was a classic under-manager. Sometimes these leaders are disengaged from their work, but most are afraid of conflict. They don’t want to ruffle feathers or resolve disagreements — even if it will serve the organization.

A couple years ago, Essentialism author Greg McKeown gathered data from 1,000 managers at 100 top companies, including Apple, Cisco, Microsoft, Intel, HP, and IBM. Half the participants described their most dysfunctional managers as controlling, over-involved, and tyrannical. The other half described managers who were “nice, but weak.”

These middling managers quickly neutralized even productive frustrations, and, in the process, signaled to employees that the status quo was just fine. A fully hands-off approach breeds apathy. It also crushes most people’s desire to take action.

“Nice, but somewhat absentee managers can continue to survive, unchecked for decades,” says McKeown. “At least a controlling boss who yells all the time gets noticed: they create acute pain and people complain. In contrast, the pain these nice “Neutralizers” produce is chronic. The pain is inflicted slowly, drip by drip.”

Under-managers also avoid tackling problems, hoping they’ll disappear with time. But as many of us know firsthand, putting off an issue (from a toothache to a lingering disagreement) usually makes it worse. Ignoring the problem is a short-term solution that almost always backfires.

Even if productivity and morale seem high, results usually flatline when an under-manager is in charge, says author and management trainer Victor Lipman:

“Under-management can often fly under the radar because the managers who have these tendencies aren’t necessarily incompetent; on the contrary, they often know their business, are good collaborators, and are well-liked.”

Conflict is inherently stressful and unpleasant, says Lipman, but handling it effectively is part of the job:

“Pushing your people and holding them accountable for strong performance won’t win you any popularity contests, and it requires some level of comfort with conflict. But while maintaining positive relationships with your own employees is a good thing, over the long run your priority is to deliver results.”

Losing great employees is another risk of under-management. Talented people want to collaborate with other smart, driven employees who will speak up and face challenges head-on. Shying away from conflict isn’t worth the potential damage.

These leaders are overly involved in their team’s day-to-day activities. They breathe down people’s necks and tell them exactly what to do — and how to do it.

Instead of giving employees autonomy to develop their own solutions, micromanagers dictate every step of the process.

Micromanagers also solve conflicts with orders, provide continuous instructions, and don’t give people the opportunity to learn from their mistakes. It’s a dangerous combination.

And while micromanagers often annoy employees, they can appear to be helpful, committed leaders who want to ensure their teams deliver.

“Bosses often assume that micromanagement demonstrates good leadership, but the opposite is true,” says Fleet Maull, an executive coach and consultant. “Micromanaging is a fear-based behavior that has a negative effect on employee engagement and productivity.”

When employees suspect their bosses don’t trust them, it “hampers their drive to succeed, destroys organizational innovation, and decreases growth potential for both the employees and the company.”

According to researchers from Southern Illinois University, long-term micromanagement can have significant costs, including “low employee morale, high staff turnover, [and] reduction of productivity.”

Micromanagement is so detrimental, the authors explain, that it’s among the top three reasons why employees resign. That’s a daunting problem.

Clearly, there’s a better way to manage. The best leaders, like Albert, give people freedom to make decisions, offer periodic feedback, and talk to employees about the problems, but not how to solve them.

Effective leaders handle conflict by listening and asking questions. They equip team members to learn from their mistakes, while developing strategies to help prevent them from happening again.

“Middle way” managers also see their staff as complex individuals. Albert needed me to produce great work, but he also wanted to help me grow and improve. He pushed in the best way possible.

As former Xerox CEO Anne Mulcahy once said, “employees who believe that management is concerned about them as a whole person, not just an employee, are more productive, more satisfied, more fulfilled. Satisfied employees mean satisfied customers, which leads to profitability.”

Managers who excel at the “middle way” view employees as smart, capable people who set the bar high for themselves. A leader’s job is to support and reinforce those standards. That’s why Victor Lipman poses a single question that shows involvement, while ensuring employees take responsibility for their work:

“Is this the absolute best you can do?”

Lipman picked up this technique from a retired U.S. Army colonel: “Asking it when someone hands in an assignment will make them aware that they’re being held accountable.”

Whether you’re a leader, manager or employee, it’s a powerful question that we can all ask ourselves, too.

Giving effective feedback is one of the most important skills a leader can master. While the best managers don’t obsess about being nice, they also realize that their employees are human. They’re learning, growing, and hopefully, doing their best.

Across industries and organizations, the following three steps can promote stronger feedback and most importantly, stronger end results.

1. Ask to clarify the problem

Good feedback should inspire improvement, not blame or disappointment. We’re not handing out grades; we’re all trying to develop better products or services. And it starts with getting on the same page.

I often try to ask our team members, “do you think there’s a problem here?” or “what do you think is our biggest problem?”

In order to move forward, we need to acknowledge and agree on the issue. Then we can begin to untangle the knots together.

Instead of assigning blind tasks, “middle way” managers also provide context. They outline the overall goal and explain why it matters.

For example, if we were setting up an office, I could ask you to move a desk from point A to point B. Or, I could say, “We want to make it easier for people to move around the space.” The first assignment is black and white, while the second could be solved with any shade of grey.

At JotForm, we recently launched a new PDF Editor. It wasn’t something I wrote on a white board and told our employees to build.

Instead, the idea emerged from rounds of customer interviews and discovering what boosts their productivity. And once our teams understood the context, they were free to develop the right solution, from top to bottom.

When we share context with our assignments, employees are far more likely to come back with stronger, more creative work than if they’re handed a random task.

“Let’s change the red to orange.”

“Looks great, but can we make it pop?”

Blunt directions leave most designers gritting their teeth. They shut down collaboration and possibilities, and they certainly don’t leave space for creativity.

When employees are trusted to develop their own solutions, they usually feel a greater sense of ownership. They’re motivated to dig in and innovate.

And even if someone is just starting out, we can still give them opportunities to learn, explore, and find the right path forward.

Leading well is an art — and we could all spend years learning how to be exceptional managers. If you’re eager to go deeper (but you’re not applying for an MBA anytime soon), I highly recommend the book High Output Management by the late Andrew Grove, the former CEO of Intel.

In this legendary book — beloved by Silicon Valley stars like Peter Drucker, Mark Zuckerberg, and Marc Andreessen — Grove shares practical advice for managing productive teams. It has helped me immensely, and informs many of the ideas I’m sharing here.

In the meantime, pursing the “the middle way” is another good way to start.

The middle is a balance point where we ask questions, offer feedback, and stay involved with ongoing projects, but we also trust that our teams have the chops to produce awesome results.

It’s a way to foster growth through learning. And it lives somewhere between grabbing the wheel and abandoning our employees by the side of the road.

Finding the middle isn’t easy, but it matters deeply for organizations of all kinds — from media companies to NASA.

“Ultimately, leadership is not about glorious crowning acts. It’s about keeping your team focused on a goal and motivated to do their best to achieve it, especially when the stakes are high and the consequences really matter. It is about laying the groundwork for others’ success, and then standing back and letting them shine.”

Examples of 4 Mental Models in Business

Why "Being Happy" Won't Get You Where You're Trying to Go

How to Improve Self-Regulation to Cope in the Workplace

The 5 Types of Entrepreneurs

How to Stop Self-Sabotage

How to delegate tasks effectively