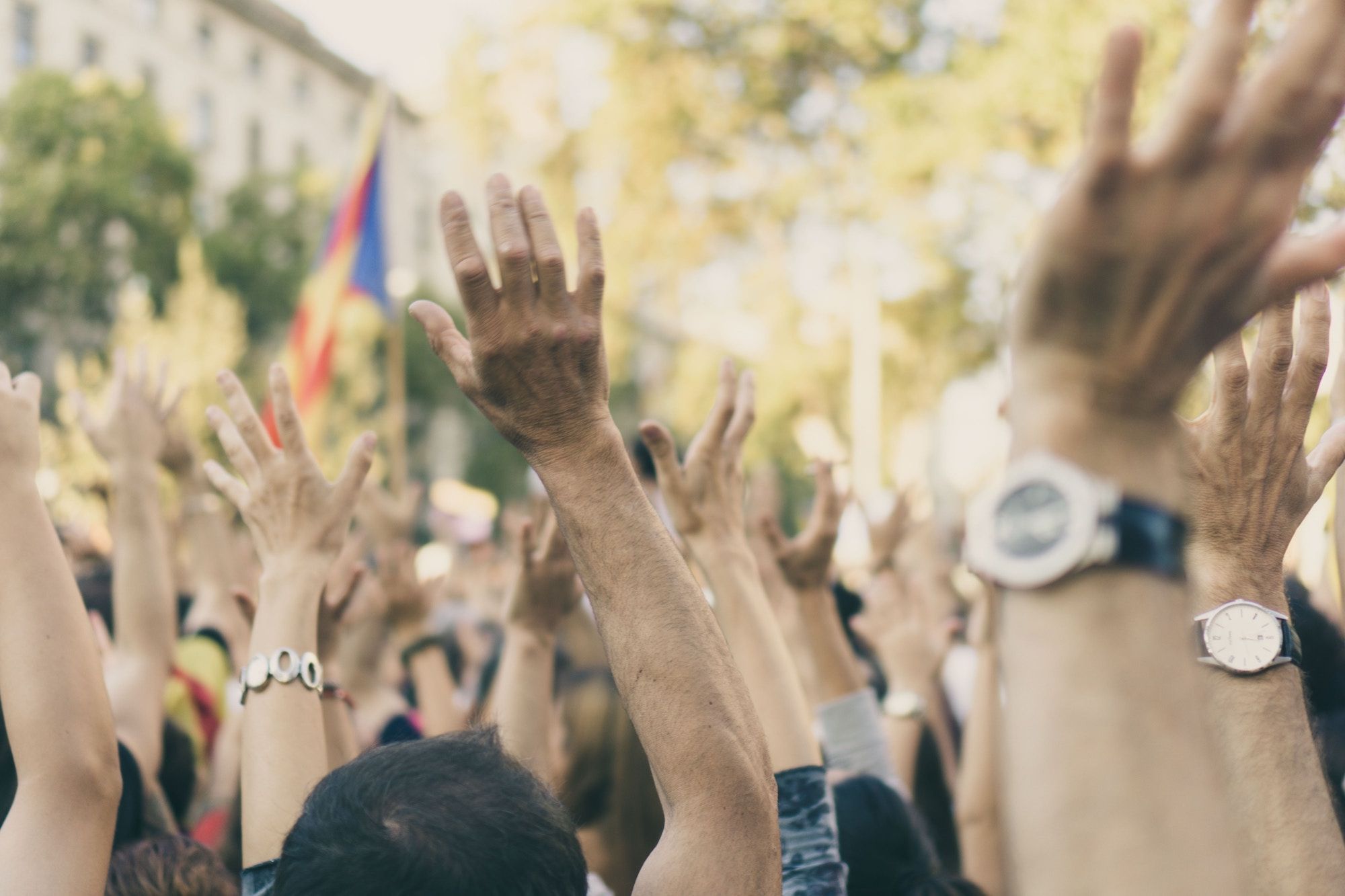 Your company doesn’t need a social purpose to succeed

Outside, a protest has taken over the streets.

A moody cello player leaves his instrument and joins. Then a frustrated photographer.

Cut to a lithe model in a silver dress. (Is that a Kardashian?) She observes the passing march, then rips off her blonde wig and joins the movement, too.

The scene ends with a playful exchange between a police officer and the model, who crosses the protest line to offer him a cold beverage. Spoiler alert: he takes it.

I remember the first time I watched Pepsi’s now-infamous 2017 ad. The company’s intentions may have been good — to promote free speech and unity — but I agreed with the general consensus: Pepsi missed the mark.

A day after its release, Pepsi removed the ad and apologized for its blunder.

Some saw the ad as fodder for internet memes. Others were outraged, claiming the beverage conglomerate had sloppily co-opted important global movements.

Pepsi tried to use socio-political protests to promote its totally-unrelated products. And people quickly saw through the ruse.

The Pepsi incident is also part of a broader trend: companies aligning with social purposes to project altruistic corporate values.

According to recent data, both employees and consumers prefer brands with a purpose — and companies are scrambling to mine that goodwill.

But not all companies need a social purpose. Unless a brand is inherently purpose-driven, companies shouldn’t try to manufacture a social stance. Doing so, as I’ll explain, can cause a serious negative backlash.

My company, Jotform, provides online forms. Though we aim to make organizations more productive and people’s lives easier, we don’t have a social purpose at our core.

Nonetheless, we can maintain a competitive edge in our field, and build a company with which customers and employees are proud to associate.

The pitfalls of having a purpose

In 2006, Blake Mycoskie was traveling through Argentina, when he discovered that many rural children lacked shoes. Going barefoot prevented them from attending school, collecting water from the local well, and even exposed them to a variety of diseases.

Inspired, he started a shoe company that matches every purchase by supplying a pair of shoes to a child in need.

TOMS shows how a social purpose can catapult a brand to the next level and nurture an enduring customer base.

People like supporting causes they value. And if they can do so through their purchases, even better. According to a 2017 study, 87% of consumers would buy a product based on the company’s advocacy around an issue they care about.

We see this all over the board, from shoes and body products to cleaning items and cars.

Consider Tesla. Not only does the company convey a cool, hi-tech cachet, but people also feel good for choosing “clean” transportation that produces zero emissions and combats climate change.

Employees, particularly Millennials and Generation Z, say they want to work for companies that have a social purpose.

But before you hitch your wagon to the latest social movement, remember the Pepsi debacle. A purpose is only advantageous to a brand if it’s authentic, meaning the social issue is either at the heart of the brand (e.g. TOMS) or makes sense given the brand’s products.

For example, Pepsi’s more recent initiative — to provide safe drinking water in H20-stressed parts of the world — is a far more intuitive fit.

KFC’s Buckets for a Cure — a fundraiser to support breast cancer research — is another example of an ill-fitting purpose. Obesity increases the risk of breast cancer. While it’s delicious, fried chicken doesn’t help the fight against obesity. The campaign caused a public backlash.

People viewed KFC’s initiative as seriously misguided. Had a cold-pressed juice company launched the same fundraiser, it would have made sense. But KFC is where you go to indulge, not to make health-conscious choices.

A social purpose can also go awry when a company claims to do social good but mistreats its employees behind the scenes.

For example, Uniqlo is the Japanese fast-fashion label forecasted to outpace H&M. Founder and CEO Tadashi Yanai has said that Uniqlo aims to make a positive change in the world and to “bring the highest quality of life to the greatest number of people.”

Yet Uniqlo recently came under fire when reports emerged of unpaid Indonesian workers — a far cry from the company’s goal to improve people’s quality of life.

In the words of author and business strategist Graham Kenny,

“Before you launch your purpose campaign, put your house in order.”

Even if your company doesn’t naturally align with a social purpose, it’s important to run a principled, ethical business. Organizations with strong values that treat their stakeholders well can reap many of the benefits of purpose-driven companies.

When your company doesn’t have a baked-in purpose

Since 2006, Jotform has provided users with online forms. Over the years, we’ve innovated and introduced new updates and features. But our mission has stayed the same: to make organizations more productive and our users’ lives easier.

We don’t claim to have a broader social purpose — and that’s okay.

I still sleep well at night because we continue to achieve our mission and we remain competitive in an increasingly crowded field.

But, how can organizations like ours still achieve the benefits that flow from social purposes, such as customer loyalty, performance, and employee satisfaction?

Companies without a baked-in purpose can thrive by listening to customers and building a culture that truly cares about employee engagement and wellbeing.

Consider the chicken nugget; in particular, spicy chicken nuggets. In early 2017, fast-food giant Wendy’s removed the item from its menu.

While it wasn’t the most popular order, their spicy chicken nuggets had a loyal (and vocal) group of devotees who complained about the change on social media.

Burger King, one of Wendy’s main competitors, heard the call and quickly added spicy chicken nuggets to their own menu. They also pulled some cheeky social media moves, like inviting customers named “Wendy” to try their nuggets for free.

Burger King’s social media engagement skyrocketed. They gained new customers and turned a small win into a massive PR victory. Perhaps more importantly, they gained a reputation as a company that listens to what customers (and potential customers) want.

At Jotform, we also try to listen to our customers and keep an eye on our industry at large. We regularly solicit user feedback and give users what’s most valuable to them, even if that’s a more traditional product, rather than a flashier update.

We also pay close attention to user reviews. And before implementing a new product, we do several rounds of targeted testing.

For example, last year we tested our latest product, Jotform Cards, with a small user group. To our surprise, we found that people who received the new card-style forms were 30% less likely to become active users.

After further testing, we confirmed that many customers preferred our traditional forms, but an even greater percentage wanted a choice between the two.

We soon learned that people who could choose their form style were 20% more likely to become active users.

Today, we offer customers a choice between Jotform Cards and our traditional forms.

We only arrived there by digging into the data, testing, and adjusting.

By taking a customer-driven approach, our user base continues to grow.

In fact, last year alone we gained one million new users — without attaching ourselves to a social purpose (though many of our users are nonprofit organizations, so I’m happy to know we’re indirectly supporting these altruistic missions).

Tesla founder Elon Musk is notorious for pushing his employees to work harder than the competition.

The extra hours are worth it, Musk wrote in a recent company email, in order to support the “mission of accelerating the advent of sustainable transport and energy, which is important for all life on Earth.”

Important for all life on Earth.

It’s a grandiose and inspiring message, to say the least, and Tesla employees are no doubt energized by their company’s mission.

But not every company needs to have an earth-saving purpose in order to engage employees and attract top talent.

As I wrote above, listening to customers is crucial. Listening to employees is equally important.

Hulu, for example, has become a video-streaming juggernaut in a competitive market. And in 2014, they improved customer retention by instituting a new system that collected feedback from both customers and employees.

By listening to employees, they learned how to better satisfy customers, while incentivizing their teams to provide better service; seemingly small steps with (potentially) huge results.

In 2014, improving Hulu’s retention rate by even one percentage point would generate an extra $11 million in annual revenue.

Organizations can also engage employees by helping them to grow, and by providing a sustainable work-life balance.

At Jotform, we periodically challenge our employees with hack weeks: high-speed, multi-team sprints toward a specific goal, like new product design. Teams have four days to innovate and prepare for Friday’s demo day, when each group presents their ideas to the whole company.

Not only do we end the week with some awesome ideas, but these hack weeks also inspire our teams to stretch their productivity and creativity.

Companies should also encourage employees to book time off. For example, one study found that after taking at least a week of vacation, 70% of employees said they were driven to contribute to their organization’s success.

It’s OK to not join the movement

Not every organization is meant to tackle social issues. If we suddenly chose a social purpose, our customers would smell the inauthenticity — and it would detract from our ability to improve the service we provide.

But companies without a social purpose can still run a principled business.

Give users the highest possible utility and embody the values that truly matter to your stakeholders — both employees and customers alike.