Building my startup for 12 years: how to win the long game

by Aytekin Tank
“HA! That’s THREE times as much funding as their competitors now!”, he shouts gleefully, eyes scanning Crunchbase as if it’s a celebrity gossip forum.
We’re hanging out on a Saturday with the kids, and I’m trying to steer the conversation away from business.
But my old friend can’t help but get distracted by the incessant notifications announcing new funding rounds. I don’t blame him.
That’s the thing about hyper-growth startups: they’re exciting to follow.
Will they be able to raise their next round of funding, or crash and burn?
Who will they hire and fire fast?
Will they become glittering unicorns — or just another casualty in the ever-growing tech graveyard?
These are the narratives spun by today’s startup media, whose limelight shines exclusively on the unicorns native to Silicon Valley.
Turbo-charged by VC money and famed for their super-speedy growth, they’re defined by a current valuation of $1bn + and boast huge vanity metrics.
And if unicorn superstardom is the goal, then rapid growth is the only benchmark worth knowing.
However, I believe in another, quieter kind of success.
Yes, the media glorifies big wins, precarious bets and fast movers; but there’s an alternative type of victory that’s just as valuable.
It comes with playing the long game.
Starter-kit? Courage — and years worth of patience.
Tactic? Slow, organic, customer-funded growth.
Prize? A company with solid foundations, lasting power and integrity.
Slow growth doesn’t have to be an unwanted consequence on a journey we’re always trying to accelerate.
It can be a deliberate choice — a smart strategy with benefits to be reaped.

“Good things come to those who wait, but only the things left behind by those who hustle.”
Aspirational quotes like this are everywhere.
They laud the ‘successful entrepreneur’: a fast-moving risk-taker who clocks 80 hour weeks and three hour sleeps. His hustle is as hard as his handshake, and he’s fluent in woo-ing VCs.
He certainly doesn’t wait around for anything. 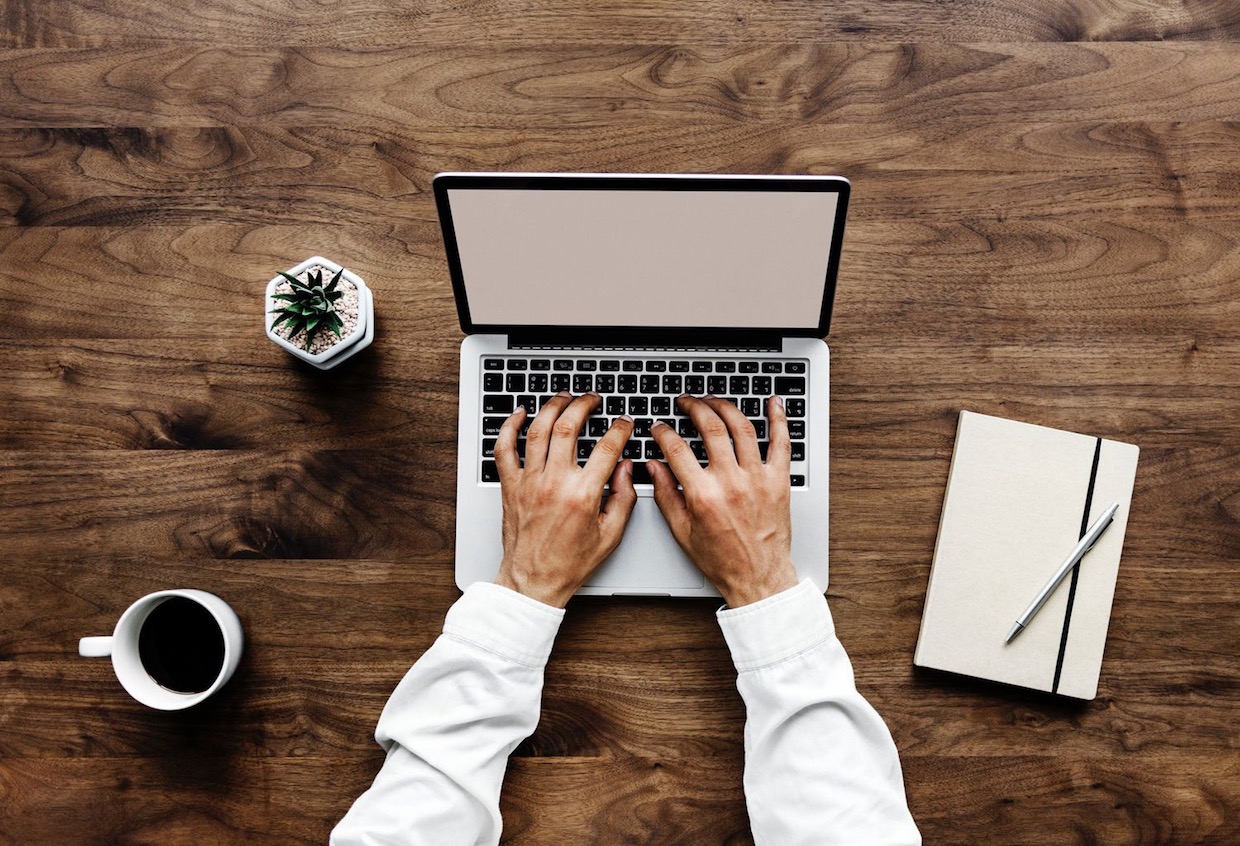 Even if I dare to call myself a successful entrepreneur, I wouldn’t match the profile. I’m a pretty risk-averse and quiet guy, and would rather be at home with my family than in the boardroom. I expect my employees to have a life, just as I do, unshackled from their desks — no ping pong tables required.
And I believe good things are worth waiting for.
I realize this way of life won’t earn me an invitation to glitzy summits or top of TechCrunch. It won’t get investor fingers twitching to write me a cheque.
Luckily, that’s ok with me. Being a bootstrapping solo founder means the only people I need to impress are my staff and our customers.
Sure, my eyes may bulge (briefly) when I see peers securing A Series funding or being accepted into Y Combinator. But that’s not what I aspire to. It never has been.
From the moment I started JotForm, my priority was to do things on my own terms — without following the commandments of Silicon Valley.
I didn’t quit my day job to follow my passion; I waited five years before going all-in. I got very good at wearing all the hats first, and only hired people when I absolutely had to.
I scaled slowly and cautiously, keeping an eye on profits at every stage. Vanity metrics weren’t on my radar.
Today, we have 3.5 million users and over 100 staff. I couldn’t be prouder of where we are. But it took 12 years and counting to get here.
Sure, this timescale might ring alarm bells to would-be entrepreneurs.
But the years have flown by, and I believe each one of them has taught me something fundamental:

Building a startup is a journey — not a final destination

Why would we aspire to rapid growth? Here’s the easy answer: because it means getting where we want to get to, really quickly.
But that’s only half of the story.
The other half raises interesting questions: where is it that I want to get to? What do I gain by getting there quickly? And what am I prepared to sacrifice by making speed part of my strategy?
An important part of my goal for JotForm was for us to have staying power.
And if that meant growing slowly to avoid the risk of early folding, I was happy to wait.
But it’s hard not to feel impatient sometimes.
From get-rich-quick schemes to crash diets, the promise of instant gratification is everywhere.
And the startup world is no different:
“If you do enough A/B tests/email sign-ups/audience building/blogging, the dollars will start pouring in.”
If I’d measured JotForm against a lofty goal (make millions of dollars; get millions of customers; star on a magazine cover), I would have felt discouraged for a good part of those 12 years.
Because I wasn’t ‘there’ yet, and getting ‘there’ quickly would have been the only thing that mattered.
Instead, each step forward (getting more paid signups, improving our UX, creating a new product… ) felt like something to celebrate.
It’s certainly been a marathon, not a sprint; and my enjoyment throughout hasn’t relied on reaching a certain destination quickly.

Building a company takes energy and effort. What’s going to motivate us, if not a glittering financial goal that beckons?
Here’s James Clear’s answer:
“There is power in small wins and slow gains. This is why average speed yields above average results. This is why the system is greater than the goal.”
We often convince ourselves that change is only meaningful if it’s attached to a big, quantifiable outcome. After all, improving something by just a small percentage isn’t notable (and sometimes it isn’t even noticeable).
And if you’re focused solely on hyper-growth, smaller things naturally fall by the wayside.
How can you embed a company culture when your team has tripled in a month? How can you keep track of your customer happiness when you can’t keep track of your mounting customer base?
Plus, when you’re spending someone else’s money, it’s not always up to you what you prioritise.
But when you grow slowly, that pressure recedes. You’re able to devote time to the things that make a good business great: effective onboarding, processes, team-building, protocols, workflow, hack weeks, Q&As.
Deliberate small steps in the right direction lead to long-term sustainability because you’re building sturdy foundations — not just papering the cracks as you go.

When a company aims to scale quickly enough to win over a large share of the market, they typically worry about being profitable later. The laws of business physics don’t apply.
They’re worth $15 billion! Ok, on paper. And that’s just an estimate for the future — not a concrete valuation.
A study from the National Bureau of Economic Research concluded that, on average, unicorns are roughly 50% overvalued. They aren’t actually producing billions of dollars worth of revenue, but due to the size of their investment, the company valuation grows to the mythical 10-figure sum. 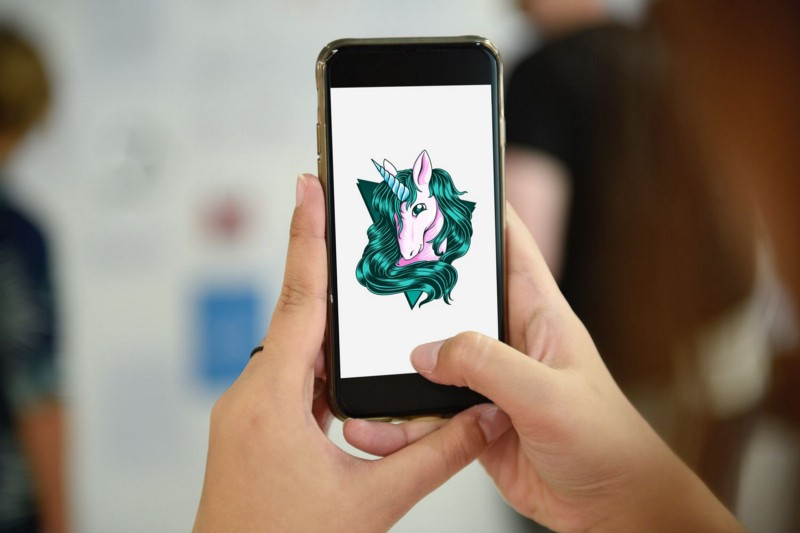 This is shaky territory for founders — but also for their staff.
Even Y Combinator’s Sam Altman admits:
“The people who get hurt most often are employees at these startups who look at these valuations and think they aren’t pretend.”
Relying on estimates and cashing in on evaluations is a risky business. In many cases, the gamble for growth pays off; in others, they pay out.
Receiving an astronomical cash injection can set up a business for lifelong success, yes; but it also makes the business far more likely to fail.

As Warren Buffett once said,
“It’s only when the tide goes out that you can see who’s been swimming naked.”
Big bucks require super-fast scaling, yet high growth itself is extortionate. This is partly why premature growth is the number one cause of startup death.
Placing big bets on economy-of-scale improvements often doesn’t pay off. And within the 10% of startups that make it to investment, 75% of them fail to return the invested capital.
What’s the alternative? Sustainability.
How do you achieve this? By focusing on profits from day one, no matter how modest they might initially feel.
With customer-funded growth, the numbers don’t lie. Slow, cautious scaling sets you up for the next 20 years — not the next exit.

Growing for the future 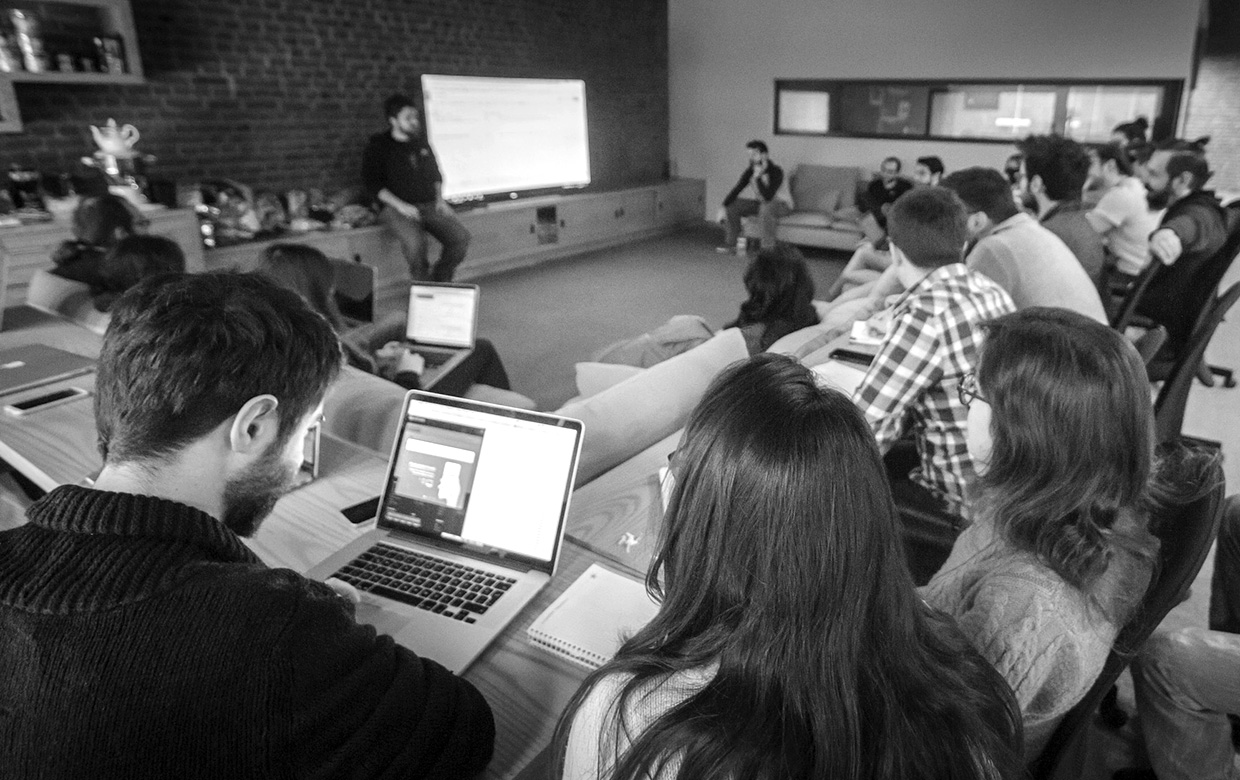 Team JotForm
By regrouping and discovering new, cost-effective growth drivers, slowing down can actually lead to superior growth in the long run.
Quick gains and big payoffs are always tempting, but they shouldn’t overshadow the value of long-term stability and sustainibility.
And there should be no shame in taking a different approach. I attribute a large part of JotForm’s success to our long (and sane) journey: working hard, steadily, for years — without burning ourselves out.
And although I’ll never be a billion dollar unicorn, a harmonious work culture paired with total creative and financial freedom is more than enough compensation for me.
You can retain your values, freedom and flexibility. You can learn from a slow-burning journey. You can focus on the long-term rather than the short.
And you don’t need a co-founder, a growth hacker, an A series or an exit strategy to do so.
Win your own race, at your own pace.

Your mindset and the stage of your startup