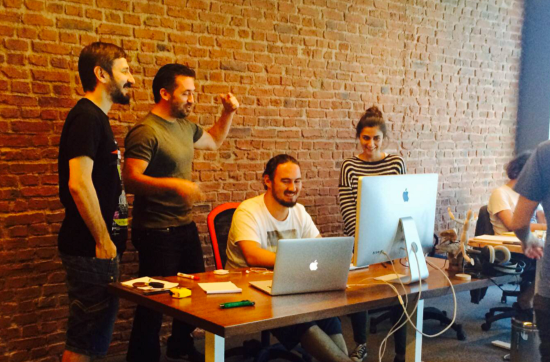 Many companies shoot off into the sky like a firework, exploding impressively and garnering applause. But then they quickly fizzle out, blending into the night sky leaving only smoke as a reminder that they once were great. Rather than seeking pomp and circumstance, Jotform has flown under the radar. What started as a flicker has slowly burned brighter and brighter each day since 2006.

Eschewing a rapid and erratic growth strategy to focus on the fundamentals, Jotform was developed carefully and conscientiously. With a laser-like focus on quality product, an intuitive, easy, and useful online form builder was built. The mission? Help people with their online form needs. In 2006, there was no WYSIWYG online form builder in existence. People had to grind out code to produce their own forms, it was far from a quick and painless task. I decided to attack the problem rather than just accept things for the way they were, as I was tired of making forms myself! Jotform was created.

I was working as a software consultant while building Jotform as a side project. After three and a half years of working on Jotform as a passion project, it reached a level where it needed to be my sole point of attention. Completely bootstrapped to this day, Jotform’s success is built on a foundation of years of hard work, continuous improvement, and steady growth. It took us seven years to reach the first million users, and we’re on our way to beating our record to attain our second million.

Instead of expanding Jotform’s product offering, the Jotform team focused on the one flagship product, the online form builder. Energy was put into expanding its features and capabilities and building on the central idea. Constantly being refined, enhanced, and taken to new heights, Jotform has grown to over 100 integrations. The Form Designer is the most advanced design feature across any online form builder, allowing users to customizes backgrounds, color schemes, fonts, and more with ease. The Theme Store allows users to use and share pre-made form themes.

Almost a decade later, growth at Jotform is still on an upward trend. The team is tripling in size, and the offices are buzzing with excitement. We can’t wait to see what’s next for JotForm.

Steve Hartert
Steve is Chief Revenue Officer at Jotform and is a prolific writer and presenter about marketing. Raised in Southern California, he earned a MBA in marketing and currently lives in the San Francisco Bay area. You can reach Steve through his contact form.

A look at Jotform’s demo day