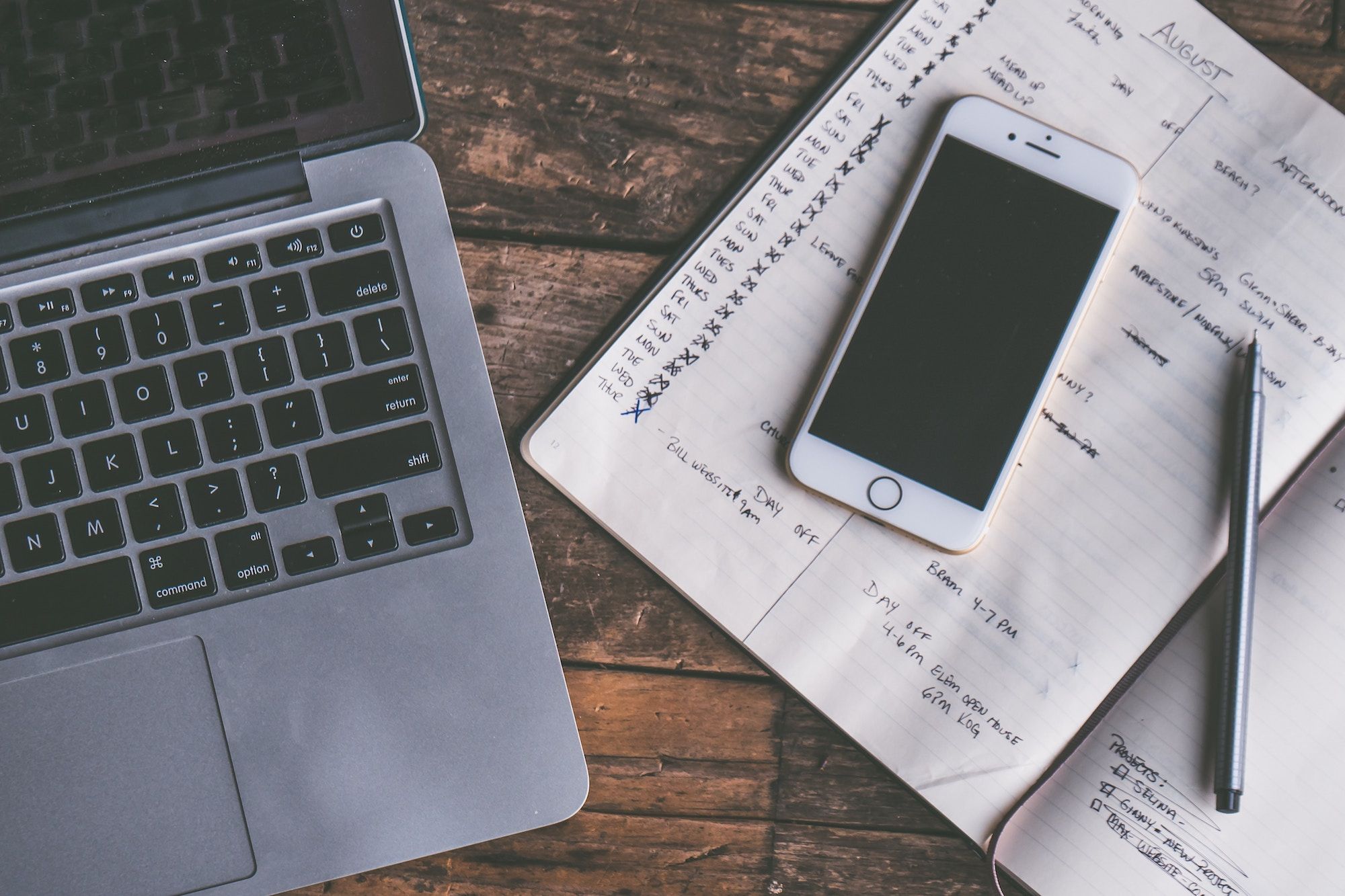 That’s how Neil Pasricha felt at the beginning of 2016.

After quitting his job as Walmart’s director of leadership development — to become a full-time author and speaker — Pasricha observed that his productivity was plummeting.

Despite leaving the demands of the corporate world behind, the author now found a variety of new tasks were occupying his time.

Research calls with sources, lunches with literary agents, meetings with web developers, and other logistical responsibilities sneakily seeped into Pasricha’s workdays. It didn’t take long for him to realize he was avoiding his most important work: The actual writing.

Eventually, the author discovered a simple solution he now credits with saving his career, his time, and his sanity:

Pasricha decided to block out one day per week to work on his book with zero distractions. The rules were simple: No phones, no emails, and no conversations with others.

“As our world gets busier and our phones get beepier, the scarcest resource for all of us is becoming attention and creative output,” says Pasricha,New York Times bestselling author of The Happiness Equation. “And if you’re not taking time to put something new and beautiful out into the world, then your value is diminishing fast.”

As you can see by the aforementioned New York Times reference, the technique worked. Pasricha’s success with “untouchable days” isn’t surprising, considering that shifting between tasks may reduce productivity by as much as 40 percent.

Task-switching causes what researchers call “attention residue,” and is a dilution of focus caused by competing thoughts. It’s also why I write “morning pages” related to present problems, potential solutions, and unexplored ideas for the first two hours of every workday.

While I would love to block out an entire day for one specific task, it just doesn’t seem realistic for me. As the CEO of a bootstrapped company, my input is needed for a variety of daily decisions, from hiring to product development.

However, Pasricha’s story did renew my curiosity about how much can be accomplished with focused work. Which is why I’m currently exploring the potentials of context scheduling.

Focus is the lifeblood of the economy

Context scheduling, also called block scheduling, is the process of assigning large blocks of time to related tasks on alternating days or weeks.

This time management system is becoming increasingly common in secondary education. As reported by Education World, more than 50 percent of high schools throughout the United States are either already using or considering using block scheduling, with the most common form being the A/B schedule.

As opposed to observing the traditional “eight classes per day,” A/B students have alternating days of four longer classes. While there are many reasons for the switch, a primary driver seems to be the cognitive benefits of focused work.

One study of 820 high schools found those practicing active learning methods had significantly higher achievement levels, as measured by the National Assessment of Educational Progress.

As Cal Newport, computer scientist and author of Deep Work: Rules for Success in a Distracted World, explains in this interview:

“Focus is now the lifeblood of this economy. Successful people use their brain to create new value, making intense concentration relevant in a way that it hasn’t been before… It’s almost like a superpower.”

Solving a theorem, writing complex code, and engaging in detailed craftsmanship are all tasks Newport considers deep work. These are the kinds of jobs that cannot easily be replicated by Artificial Intelligence (AI), and they all depend upon minimal distraction.

Considering the variety of stimuli competing for our attention every day, both at work and at home, context scheduling seems like a promising tool for producing higher quality work in less time.

How to create a context schedule

Borrowing from the education system, there are numerous ways to structure a block schedule.

However, the most effective option for the busy professional is probably some version of the A/B schedule. Working in this capacity has allowed Fast Company contributor Andee Love to run a nearly seven-figure business in just 20 hours a week.

Love said she discovered exactly how impactful context scheduling could be when she worked as a coordinator overseeing autism programs in two separate schools.

“Each school had its character and needs, and I found that if I tried to visit both each day I rushed through my prep and ended the day exhausted,” Love says.

“Each time I switched schools, I drained my energy. To plug these energy leaks, I developed a schedule in which I visited one school on Mondays, Wednesdays, and Fridays, and the other on Tuesdays and Thursday.”

Love reported a drastic change in enthusiasm, competence, and energy levels after making the switch. Today she’s an executive coach who alternates her schedule between weeks, rather than days.

Here’s how to create your own context, or block, schedule:

Evaluating one’s schedule is a deceptively challenging task for a simple reason: Most people are terrible at estimating how much time they spend working on a given task.

If you’ve never done so before, consider making a calendar that illustrates how you think you spend your time. You can color code the tasks like OKDork’s Noah Kagan did here:

Then, go about your workweek, tracking how you actually spend your time. You will probably notice some hidden tasks you hadn’t even considered. And you will definitely notice some projects take much longer than you had previously realized.

Once you’ve documented your day-to-day, you can begin grouping tasks into categories (e.g. administrative, email correspondence, team meetings, creative). You may also decide to categorize tasks by less obvious characteristics, such as how you feel while completing them.

Finally, experiment with plugging your respective task categories into large blocks of time on your calendar. Does your role involve leading lots of team meetings?

Try scheduling them all on the same day each week, like Lifehacker contributor Emily Price. The San Francisco-based reporter says meetings demand larger time commitments than one might assume.

“I spend time prepping before and thinking about them after, which is great, but means that a 1-hour meeting takes around 2 hours out of my day. Putting them all together on the same day eliminates the stress of wrapping something too quickly, so I can get to the meeting on time, and struggling to refocus when the meeting is over and I need to get back to work.”

The key to context scheduling is to strategically batch tasks in a way that minimizes the need to “change mental gears.” If meetings aren’t your favorite activity, the idea of devoting an entire day to them may seem like a drag.

However, your non-meeting days will be infinitely more productive. This is just one example of many potential tasks that could be time-blocked. David Finkel, CEO of Maui Mastermind is another fan context scheduling:

“I’ve managed to designate a certain weekday — and, after a little more practice, two weekdays — where I can set aside a chunk of time to focus completely on one thing only. Those days stay fixed, no matter what. And when they come around each week, all I do is work on a single project for at least half the day — no emails, no phone calls, no meetings.”

While Finkel’s focus days are less structured than traditional A/B days, they still meet his needs. His three-to-four-hour time block is devoted to whatever “deep, uninterrupted work” happens to be most pressing that week.

That could mean sitting down to write a proposal, sketching next quarter’s goals, or organizing a customer visit. Regardless, the time slot remains on the calendar as “a non-negotiable.”

Give block scheduling a try

During my 13 years at Jotform, I’ve learned that business growth isn’t about doing more — it’s about doing more of what makes the biggest impact. Translation: Busyness is not synonymous with productivity.

If that description sounds all too familiar, you may want to consider experimenting with context scheduling. Just make sure to communicate your new schedule to clients, colleagues, and other key stakeholders in order to avoid unnecessary interruptions.

Also, don’t pressure yourself to immediately “get it right.” Whenever I adopt a new time management tool, I end up tinkering with it for a couple of weeks before customizing it to meet my needs.

Do you work from a block schedule right now? If not, does it sound like something you would try? Why or why not?

Please tell me in the comments below.