It was one month before the 1992 Summer Olympics.

The U.S. had assembled the most epic men’s basketball squad in the country’s history, appropriately dubbed “The Dream Team.”

Sports fans and journalists expected them to easily dribble and dunk their way to the gold medal — and eventually, they did just that.

As college power forward Chris Webber told reporters before the scrimmage, “I’m not going to be intimidated.”

Webber and his teammates played with grit and determination. They also gave the Dream Team a much-needed wakeup call before the Olympics began.

But most importantly, this story shows how a cohesive, motivated team can overcome incredible obstacles — including 12 of the world’s most talented basketball stars. 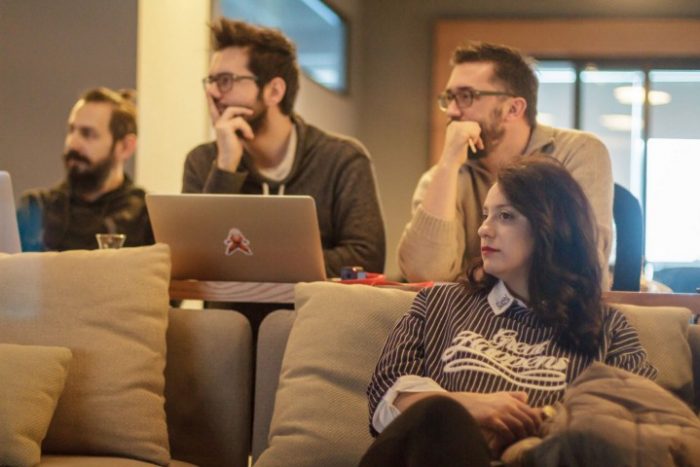 How to boost team motivation

Skills and motivation are vastly different. You can have incredible abilities, but still lack the drive (or the systems) to create results.

Working in a team, however, can dramatically enhance motivation. A healthy, happy team will push each other to new heights. And over time, the team will amplify each individual’s talent. That’s where the magic happens.

At JotForm, our employees work in small, cross-functional teams. Each group operates like a little company. They are independent and empowered to make their own decisions. They also work on just one project at a time.

I believe that singular focus is a big part of our success.

Over 12 years, we’ve grown the company into a global business with nearly 4 million users and 110 employees — without a penny in outside funding.

And it might sound simple, but when teams are in sync, they spur each other into action. They motivate each other and make smart decisions.

Great decisions produce great results, and then the cycle continues — in the best way possible.

I’m always learning more about how to help our teams fly. But when it comes to group motivation, here’s what I know for sure: 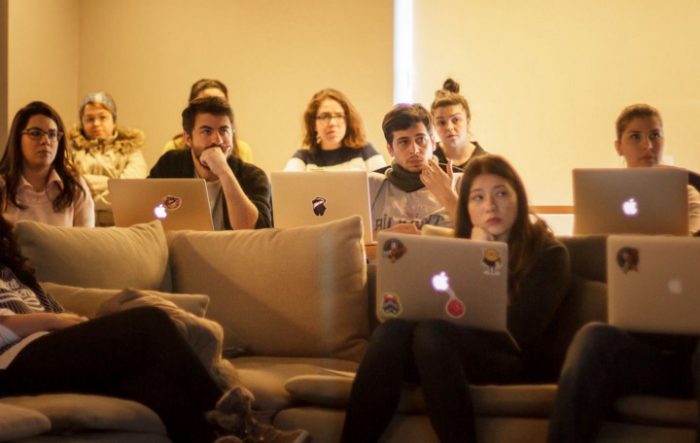 1. Give them space and freedom

Distraction is a major obstacle for productive work.

From social media to IMs to emails and text messages, that means most people spend a quarter of their day dealing with irrelevant information.

As we all know, it can be incredibly difficult to focus on what matters — and technology often makes it worse. You know the drill: someone asks a question or pings you with an update and before you know it, your brain is totally off track.

That’s a head-spinning amount of cash. But, I think lost opportunities are the bigger issue. Imagine what we could all build and create if we took back that 25% of the day.

Ultimately, there are many different ways to manage digital distractions. Getting into flow, muting Slack messages, and keeping your phone in a drawer are just a few small ways to regain mental space.

We also give our teams their own physical spaces. Each group has its own room, with a door that closes, plus big white boards and productivity tools.

I’ve learned that when teams collaborate in the same space, they stay focused. They discuss new ideas, get excited together, and stay motivated together.

It’s easier to smooth out a little snag than to untangle a huge knot.

Problems can quickly sap team motivation, so it’s important to address them as they emerge — not when they become major roadblocks.

Our teams all have designated leads. And twice a month, each member sits down with the team lead to talk through their struggles.

We’ve found that it’s a great way to flag small issues and ensure everyone’s feeling good. After all, when the team isn’t aligned, motivation really sags.

On the flip side, resolving problems before they take a turn for the worse promotes a happy, productive team. 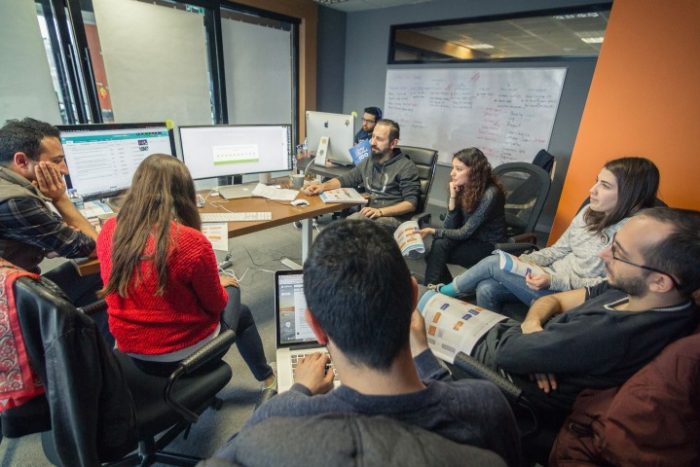 In their 2011 book, The Progress Principle, Teresa M. Amabile and Steven J. Kramer drew on 30 years of research and tracked the inner work lives of employees at seven major companies.

They learned that conventional wisdom about employee psychology is not always wise:

“When we surveyed hundreds of managers around the world, ranging from CEOs to project leaders, about what motivates employees, we found startling results:

95 percent of these leaders fundamentally misunderstood the most important source of motivation.

Our research inside companies revealed that the best way to motivate people, day in and day out, is by facilitating progress — even small wins.”

While the authors were stunned by their research, the results do make sense. Just remember the last time you made tangible progress on something vital, whether it was an assignment, a business, or a creative project.

Accomplishment is intoxicating. It boosts your motivation and eventually, your confidence. But how can you create consistent momentum?

Everyone has a different theory, but I believe in starting small. Break down your tasks. Enjoy small wins and let those little victories add up.

For example, our teams constantly release their work. They often tackle a new feature or project on Monday, then take it live and show what they’ve created during our Friday demo days.

With this approach, there’s always so much momentum in the office — and the ball just keeps rolling.

How to enhance team time management

With space and collaboration, motivation comes naturally. If motivation is one half of the formula for success, time management makes up the difference.

Many of the personal tactics I’ve shared apply equally to teams. But smart time management also means creating a work environment that respects and supports your employees.

Here are four ways that we try to foster a culture of real productivity.

1. Remember that good teams are resilient

If Charles Barkley had been injured during the Olympics, it’s a safe bet that the Dream Team still would have topped the podium in Barcelona.

That’s what makes teams so powerful; everyone plays an essential role, but you can still achieve amazing results if one person is out of the game.

I’ve often talked about how (and why) I value downtime. I want our employees to recharge and come to work rested, too.

If one team member is away, we ensure the group still has the resources they need, whether that’s a designer, a developer, a leader, or technical support.

Even as I write this, four people from our Ankara office are at international conferences. They’re busy improving their skills and developing new ideas.

They’re sharpening their saws — and that’s good for everyone.

Making quick decisions is an important way to clear your mind. Decide, implement, evaluate and move on. You’ll feel less stressed and you can put your time to better use.

So, just as I try to make fast choices, I encourage our teams to do the same.

Often, a team will agonize over a certain decision. I understand. I know they want to do their best work — or maybe they’re afraid to fail.

In that case, I tell them to email me about the problem. I’ll share my advice and help them move forward.

Sometimes, I tell them to just make a BAD decision. It’s not common advice, but once they choose, the team can progress. They can evaluate what happened and fix any small messes that happened along the way.

In the end, nothing is broken, they’ve used their time well, and they didn’t lose valuable momentum.

Try it for yourself or your team — you might be surprised how effective a “bad” decision can be.

3. Give them space to focus

“The products of knowledge work are creativity, ideas, decisions, information, and communication. All of these require extended periods of sustained focus. However, many offices have a culture in which all communication, regardless of the subject or source, carries the same level of presumed urgency and is expected to produce an immediate response.”

This perspective speaks to me. It’s easy to get caught up in the rush of business, but unless you’re an ER doctor or an airline pilot, nothing is really that urgent.

And if you’ve set up reliable customer service systems, everything else can take more time.

Urgency can also be a culture issue. For example, I’m technically the boss, but I don’t expect anyone to respond immediately to my questions and emails — unless the whole system is going down.

We don’t have a communication hierarchy.

Speaking of communication, I also ask our teams to respect each other’s time. It’s part of creating a healthy, supportive work environment. That means:

4. Slash bureaucracy in every form

Nothing slows down progress like rules and checkpoints. But sometimes, businesses default to outdated corporate structures — even when they want to be innovative.

Yes, you need to know who’s responsible for what and how work flows, but there’s no need to over-complicate it.

To me, respecting our teams’ time means eliminating bureaucracy. We try to ensure our teams are as autonomous as possible. They can make independent decisions and execute without permission.

The product leaders and I are happy to help as needed, but I’m not an “approver.” Instead, I believe in assigning responsibility and allowing people to make the best decisions they can.

“When you need to innovate, you need collaboration.”

In today’s world, innovation is the biggest challenge — and the greatest opportunity — for every business, from tech startups to retail stores.

We always want to create a better, more engaging product that helps our customers thrive. That requires cohesive teamwork.

If it wasn’t already clear, I’m super passionate about teams.

I know what’s possible when they work well together, so we do everything in our power to protect their time and help them stay motivated.

Then, we step back and get out of their way.

How managing your emotions can help you stay motivated