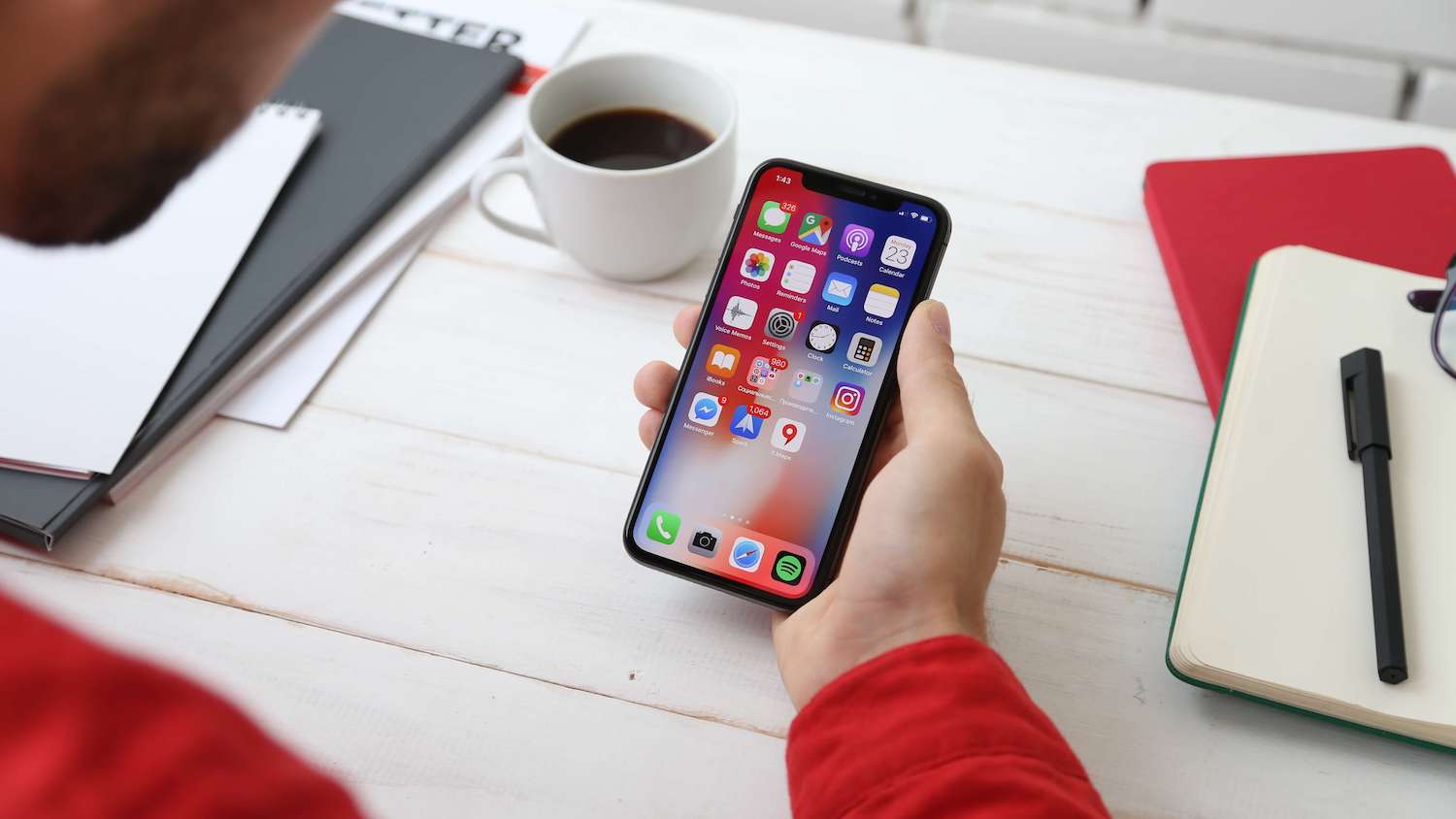 Slack is the big boss in the world of team messengers. And it’s becoming even bigger after acquiring Stride and HipChat.

Being a well-known Silicon Valley unicorn, Slack is a melting pot of top-notch functionality and versatility. However, when innovation constantly breeds further innovation, we can forget that less is more. Slack offers way more features than your company may want to deal with, which turns your team’s chat into a long and winding road.

The second reason you might want to explore Slack alternatives is the cost — $8 per user when billed monthly. That adds up, especially for small teams and startups with limited resources.

Whatever your reason, there is an ocean of business communication tools out there your team can benefit from. Some are free and offer more options than Slack’s basic plan. Some don’t restrict your message limit. Some allow you to host them on your own server.

Long story short, let’s take a look at the list of the best Slack alternatives we’ve put together for you. 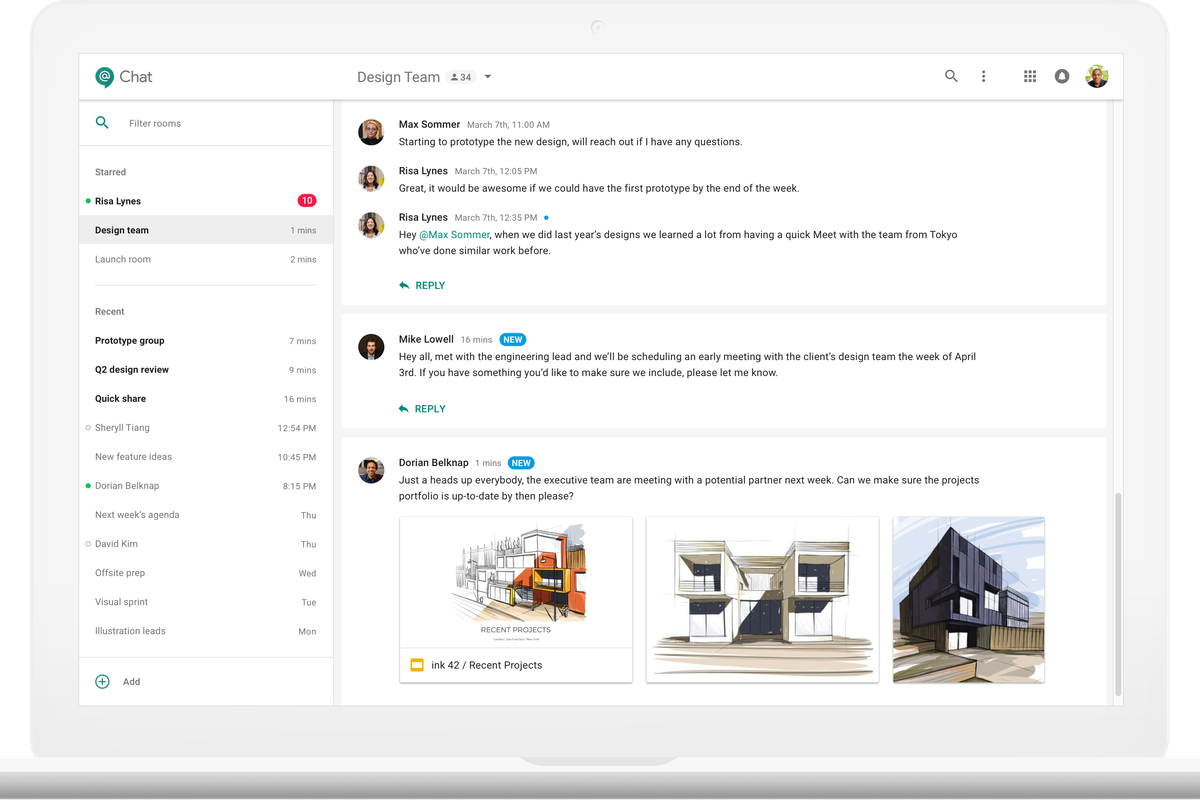 Hangouts Chat features virtual rooms that hold up to 8,000 people. As you can imagine, it has direct messaging, threaded conversations, and bots that integrate with G Suite apps as well as third-party companies. It also works with 28 different languages. What’s more, Hangouts Chat will focus on AI and use machine learning to find out what users might need: book meetings, find files, and “more” as Google says.

Hangouts Chat isn’t free, but it is cheaper than Slack. To gain access, you should purchase a corporate G Suite account, which starts at $6 per user, per month. 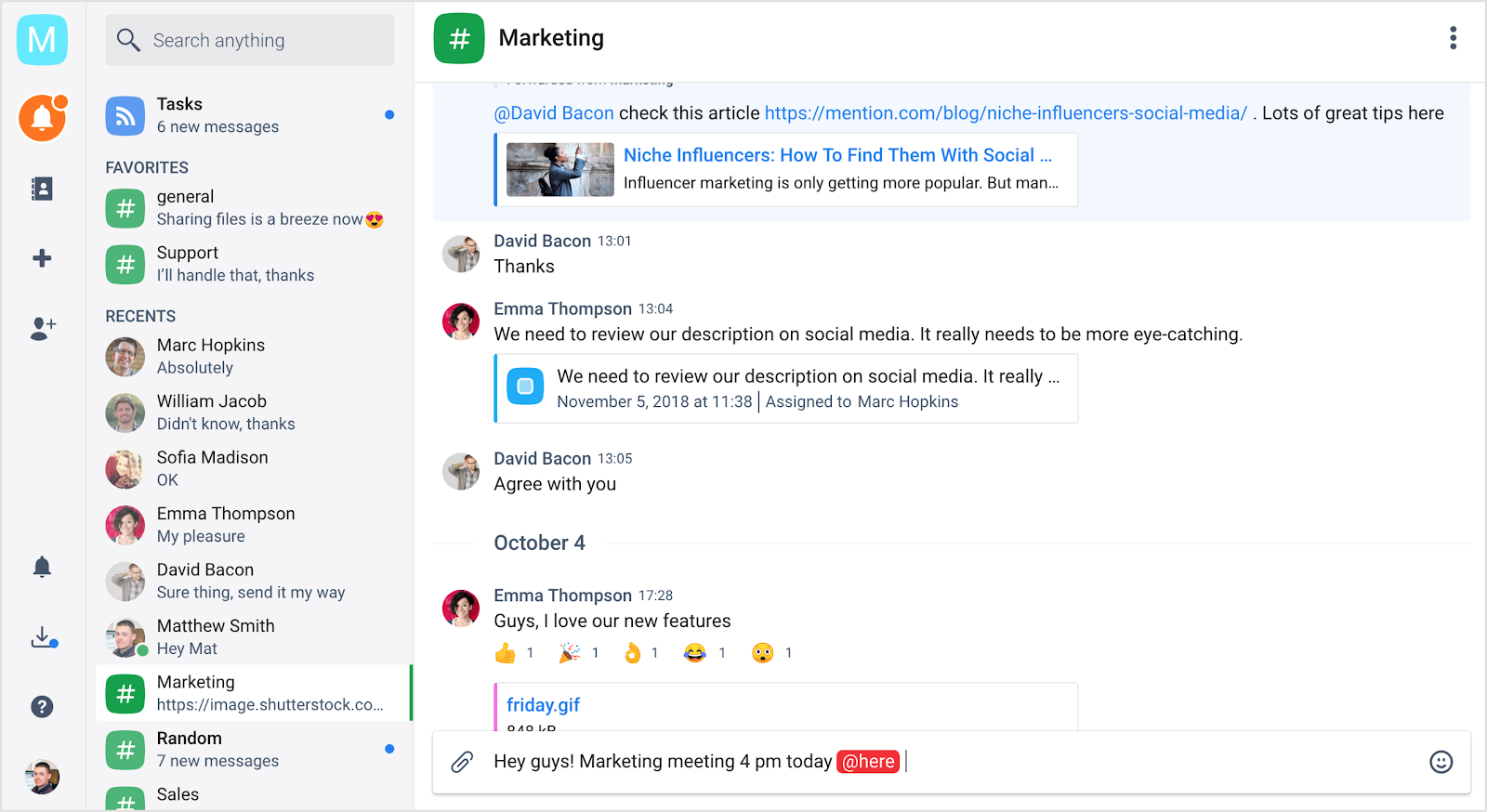 Speaking of Chanty’s setup, it organizes all of your files, links, tasks, and messages into folders in a feature called Teambook. But what you may fall in love with is Chanty’s thorough onboarding process (which is especially useful if your team includes non-techies). 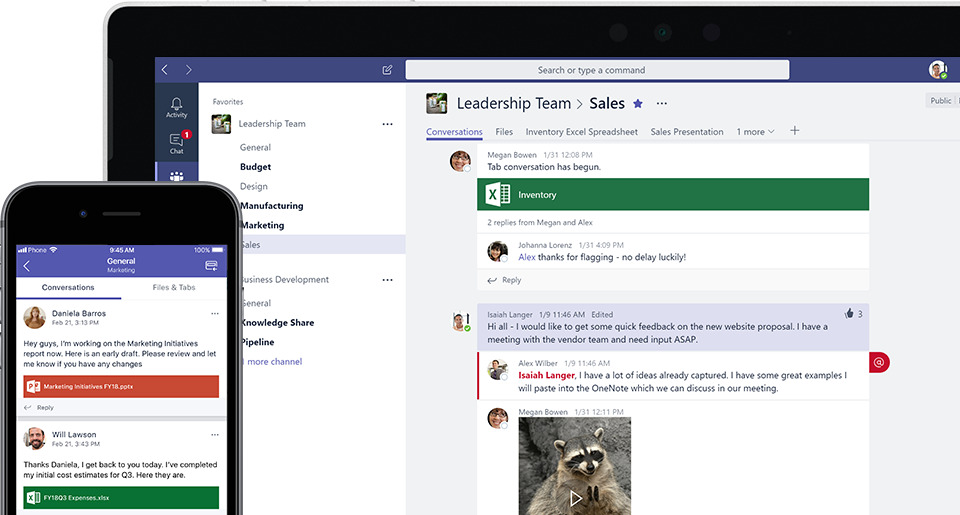 If you have access to a Microsoft Office 365 plan, then you can already use Microsoft Teams. Alternatively, you can start with the freemium version of the tool for up to 300 users. The free plan includes all the essential team chat features: instant messaging, audio and video calls, and integrations.

Speaking of storage, here you are limited to 2GB per user and 10GB shared among your team. The paid version starts at $5 per user, per month and offers more storage and features, such as scheduled meetings and meeting recording. 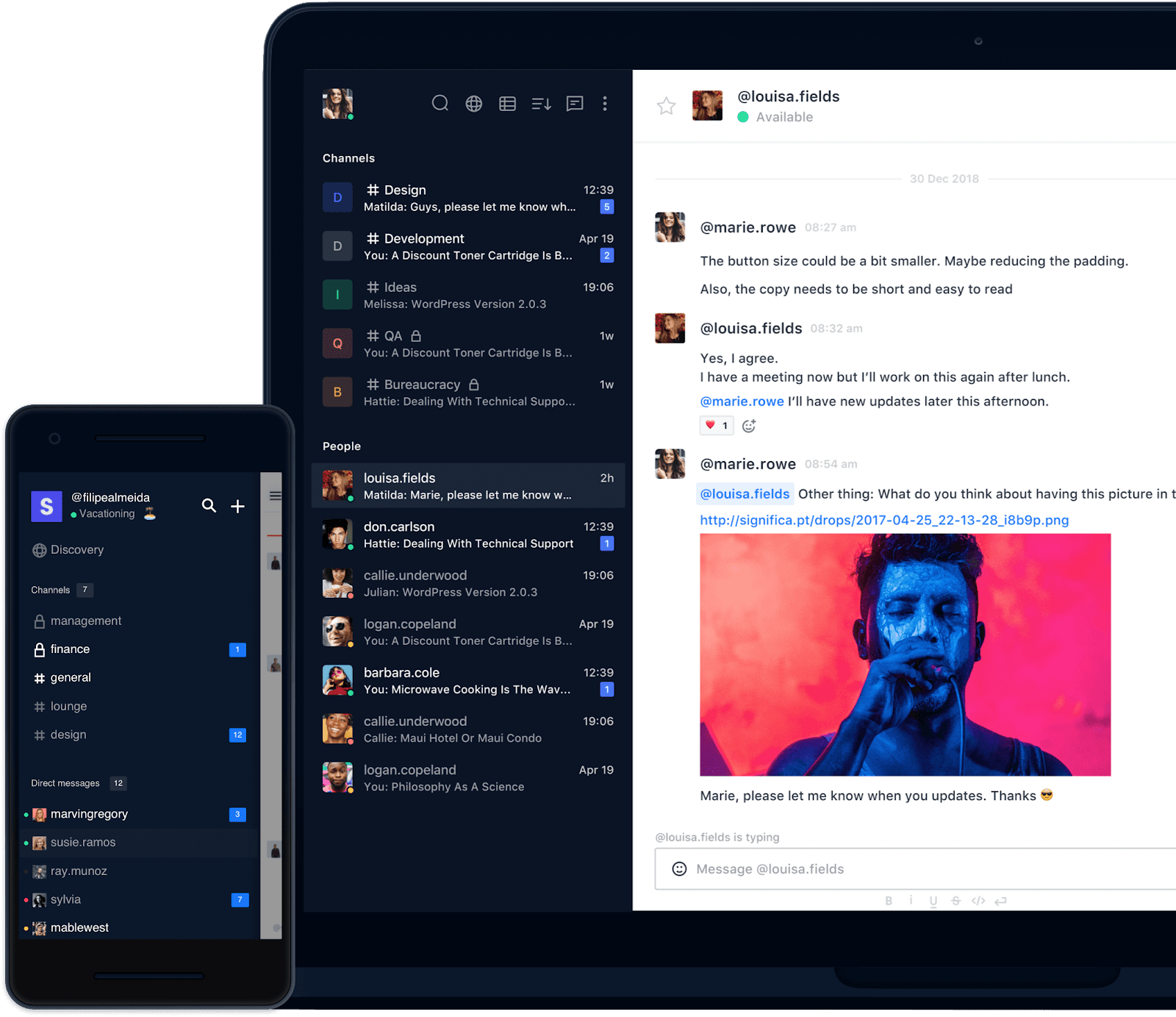 Rocket.Chat is a free, open-source, and fully customizable Slack alternative designed for anyone who wants to host their own chat service. Besides chat functionality, it has some other great features. First, it is super easy to migrate to Rocket.Chat. Export your files from Slack — and voila! What’s more, the tool offers real-time automatic translation of more than 50 languages as well as voice messages and end-to-end encryption.

If you experience issues deploying Rocket.Chat, the Brazil-based team chat tool offers a cloud solution starting at $3 per user. 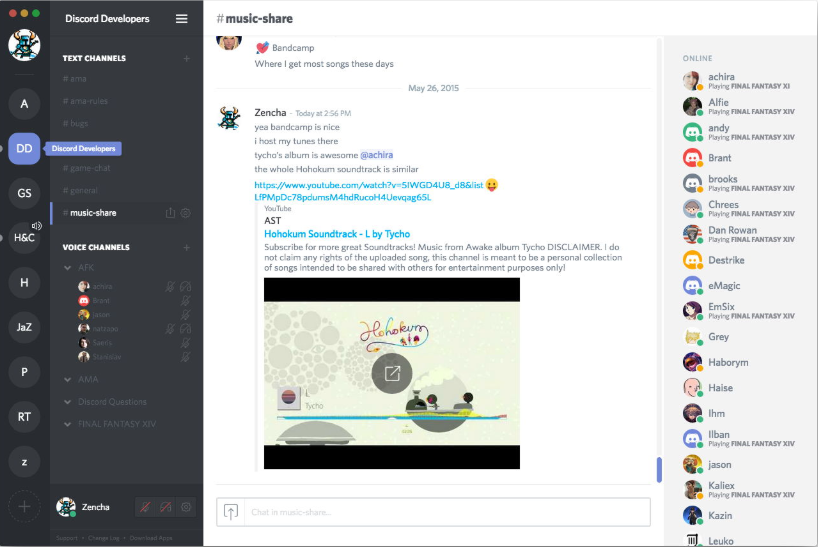 Discord is free and the most popular team communication app for gamers. The platform provides users with familiar Slack-like UI, Skype-like video, and voice chats. Discord is amazing to use while participating in a Dota 2 battle, but it also meets collaboration challenges many companies face.

The tool divides channels by text and voice. Nevertheless, users can seamlessly switch to more common private and public channels. It’s worth mentioning that Discord doesn’t offer integrations with apps you might use at work. So this tool will be a good choice for you if your team doesn’t need anything beyond text, voice, or video communication. It‘s also the only chat in this list that offers push-to-talk features and the Instant Invite link that lets you share a chat server with anyone.

Discord is free for a full set of features. But if you’d like to have custom emoji, larger file uploads, and GIF avatars in your team chat, join the paid plan for $4.99 per month. 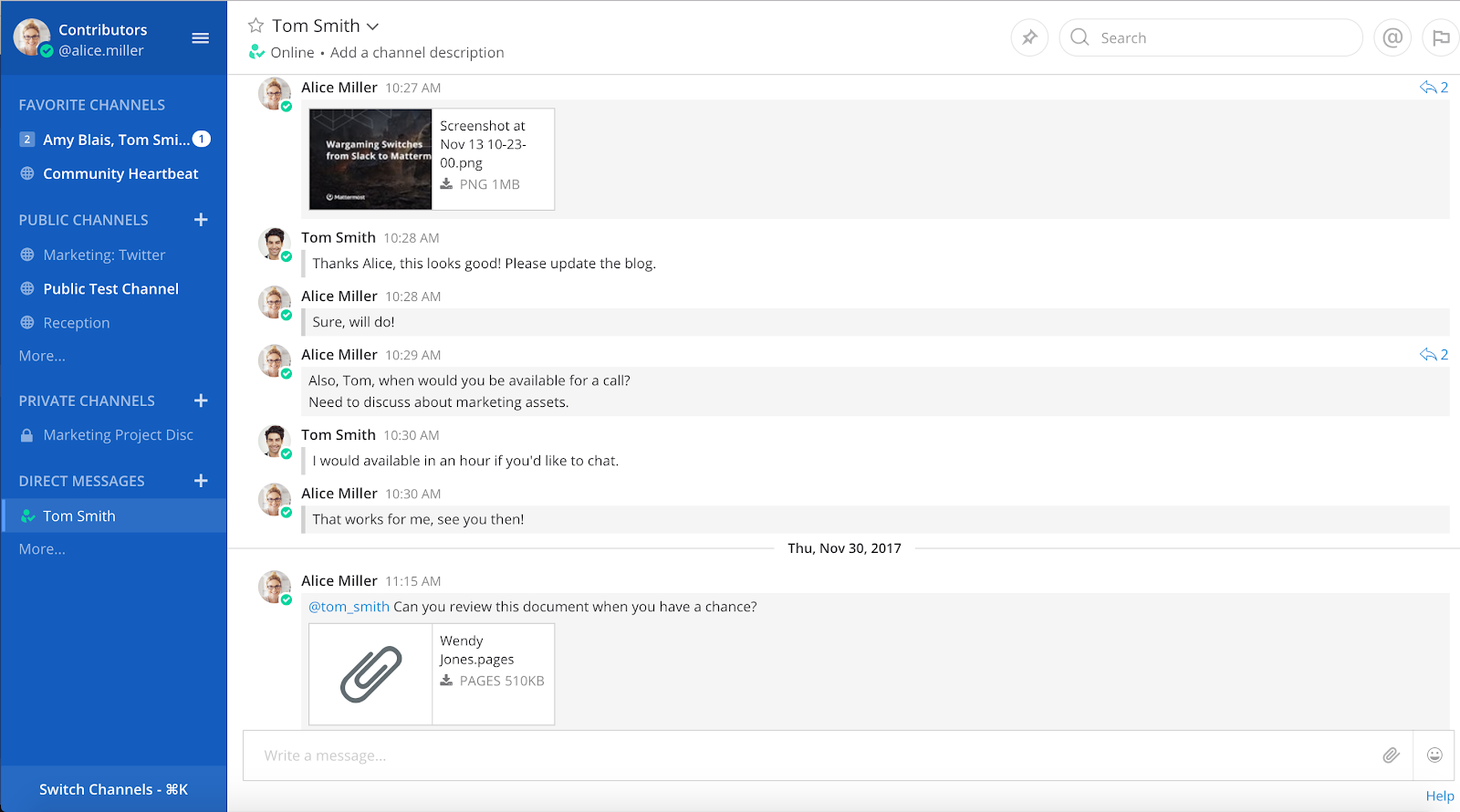 If you’re searching for a private cloud, open-source, and highly customizable communication tool, Mattermost is all you need. Despite the fact the messenger mostly targets enterprise companies, Mattermost offers a free version for smaller teams with unlimited message history, integrations, and multi-language support.

Paid plans offer endless customization options and better security, starting at $39 per user, per year. Keep in mind that you must have at least 10 users to purchase Mattermost. 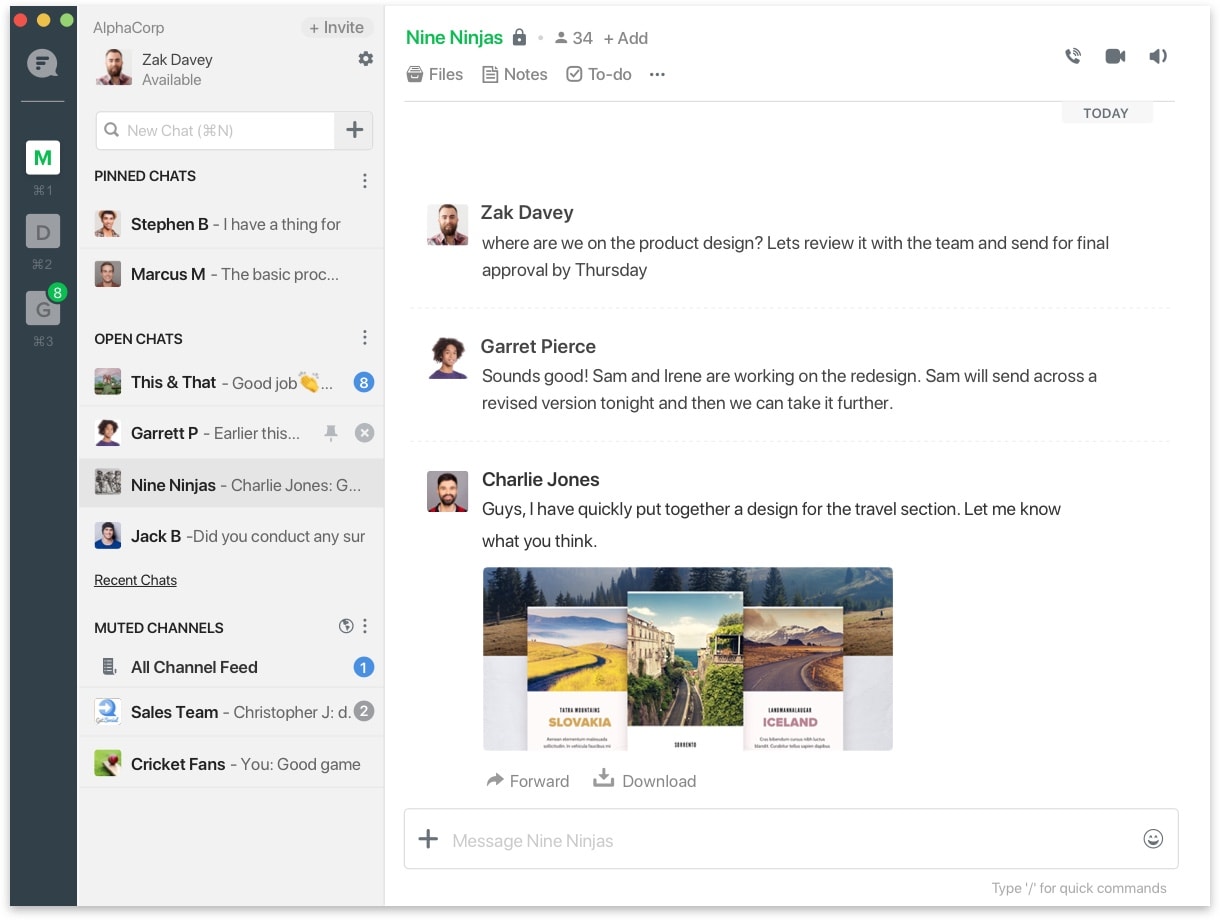 Flock is a team messenger that claims to work faster than Slack. The tool offers a freemium version that includes up to 10,000 searchable messages, video conferencing calls for up to four users for 20 minutes, and the ability to connect Flock to more than 50 apps. What’s more, here you can turn messages into tasks and add due dates to them.

Among other Flock features, you will find guest accounts, one-way announcement channels, and a five-column interface. Paid plans start from $4.50 per user, per month and unlock handy features like screen sharing, unlimited message history, and 10GB file storage per user.

Ryver is a Trello-like team communication tool with a built-in task manager. Just imagine kanban boards integrated with open forums, private groups, and one-to-one conversations. Then pepper it with voice and video calls for up to 400 people, and integrations through a Zapier account, and you have Ryver.

Speaking of pricing, this team messenger comes with a 14-day trial (no freemium plan). The cost starts at $49 per month for up to 12 users or $99 per month for unlimited users. 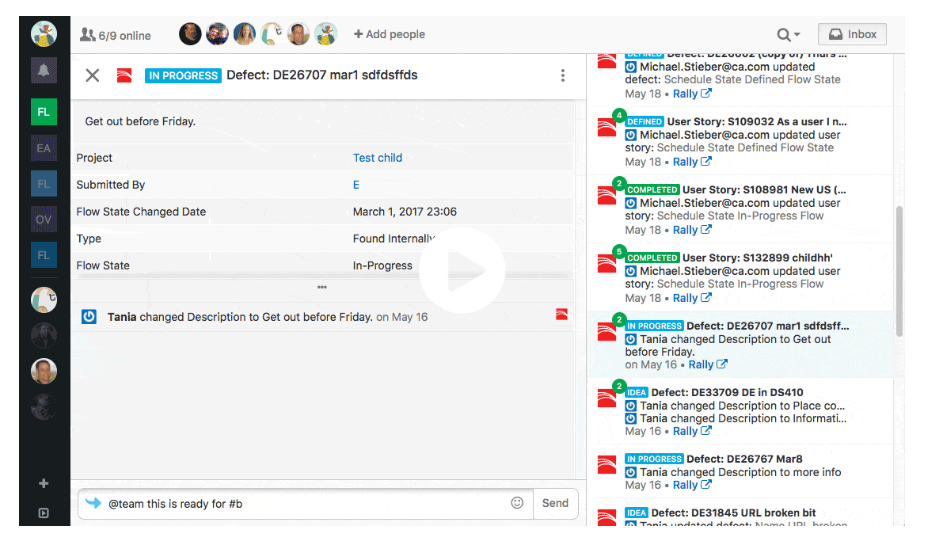 Flowdock is a team chat tool where all conversations are marked by colored threads to keep the navigation between topics seamless. Here you can make video calls through appeair.in, and you have access to more than 100 integrations. Notifications from these third-party services drop into the so-called “Integration inbox” to keep conversations focused.

Flowdock is free for up to five users. The paid plan starts at $3 per user, per month. 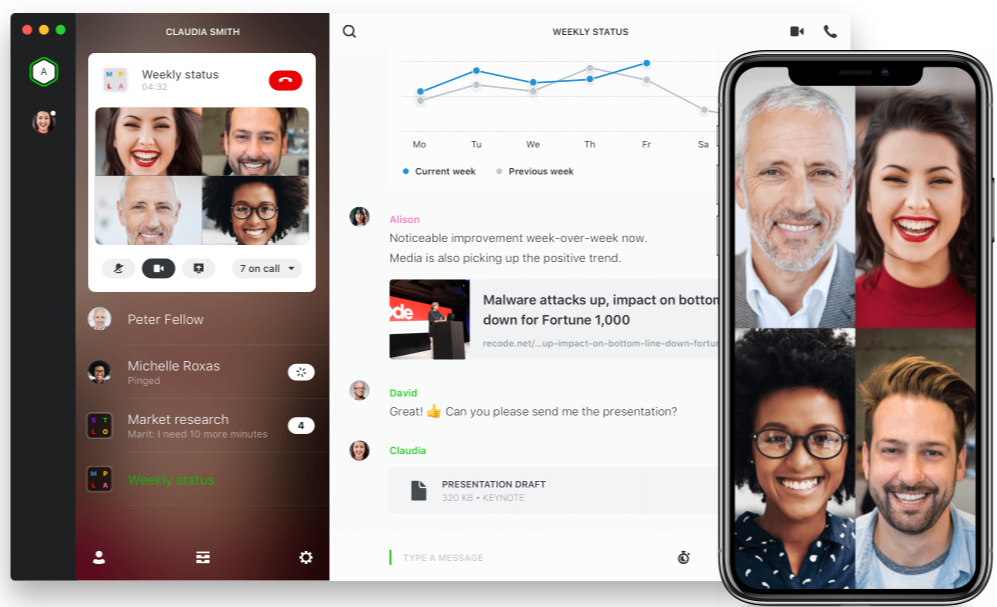 Wire is a secure collaboration platform that features one-to-one conversations, group chats, HD video calls, and video conferences. It comes with end-to-end encryption and stands out with its security. In addition to the common functionality, like file and screen sharing, Wire’s unique features include self-destructing messages and quick image editing right in the chat. The price starts at €4 per user, per month. 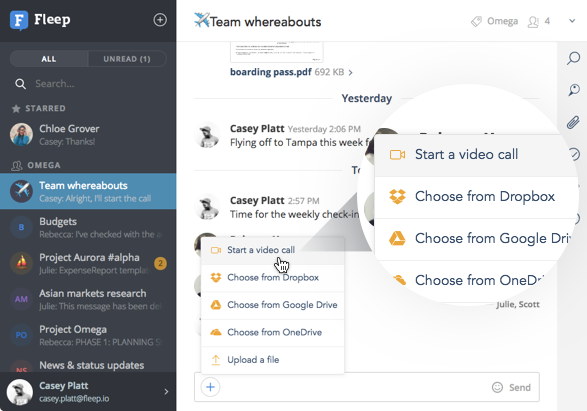 Unlike other Slack alternatives, Fleep is an open network, so you can communicate with anyone else on Fleep. As a result, the app bridges the gap between an inbox and a business messenger. Fleep integrates emails with its own chat system, which can be especially handy if you need to be a member of several teams.

Fleep is absolutely free to use and features unlimited message history and integrations in its free plan. But if you require admin controls over your team accounts, the upgrade will cost you €5 per user, per month.

Julia Samoilenko
Julia Samoilenko is a marketing manager at Chanty — a simple AI-powered team chat. This powerful and free Slack alternative is aimed at increasing team productivity and improving communication at work. With five years of experience in digital marketing, Julia is responsible for Chanty’s online social media presence and public relations. Feel free to connect with Julia on LinkedIn.

Unsplash: Big Update for the Free Photo Platform Makes it Even Better